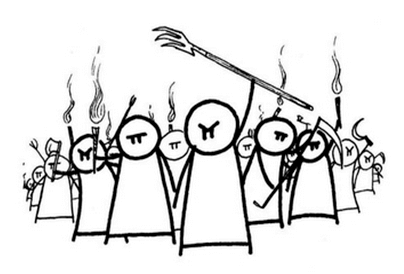 You may recall a guest blog post we published last week from Cindy King.

In it, she talked about her fight with breast cancer and the things that kept her sane during treatment, including the ability to keep working.

When she and I were talking about her publishing the story on Spin Sucks, she told me one of her doctors asked her what kind of antidepressant she was taking because her attitude was so fantastic.

She wasn’t taking anything. She was focused on work for an awesome company that allowed her the flexibility she needed to get well and keep her mind on other things.

She also said she didn’t tell many people because,

Cancer creates a reaction in people. People care, but that comes with exhausting expectations and assumptions. They want you to update them constantly. They want to tell you about someone else they know who has had cancer treatment and spent lots of time sleeping or was so sick they couldn’t work.

I found this incredibly inspiring and was ecstatic she chose us to tell her story.

We weren’t the only ones inspired. 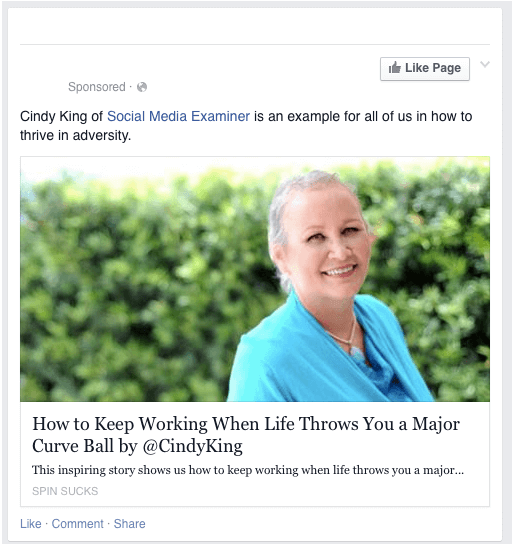 When you clicked on the ad, it brought you to Spin Sucks so that was exciting, but we were perplexed.

At first we thought this was one of the tricks Facebook has in using your images and content so your friends will click on the ad for their advertisers.

Score one for Facebook. It wasn’t them doing something slimy, after all.

We discovered it was for a company…one that we are not affiliated with, nor one we’ve ever worked with.

So Ellie Pierce, our shared media manager, set out to figure out what was going on.

Eventually this tweet led to a phone call with the chief technology officer for the company who paid for the ad that linked to our content.

By 3:30 on Tuesday afternoon, Ellie had solved the case and came back to me with her findings.

They shared the post Cindy wrote on Facebook because they liked it and thought their audience would like it. And they pay to sponsor all of their content on Facebook, including content that links to other sources. Their ads targeting overlaps with those who like Social Media Examiner, so it makes sense that our audience would see the ads. The explanation makes perfect sense to me, and I don’t think it’s really a problem. But he did say it’s been taken down now—he and his team seem to have misconstrued my questions about the post/ad as a request to remove it.

Or so I thought.

When I started work yesterday morning, I found a Facebook update from the chief technology officer who, just an hour before Ellie updated me on what had happened, had vented about the situation online and publicly. 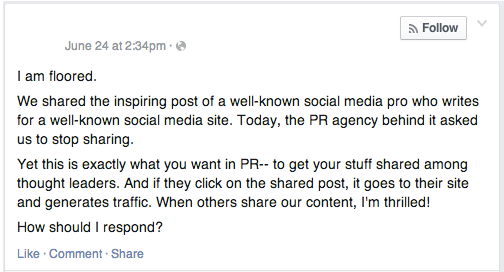 On its own, it’s pretty benign. But what happened next is a lesson in the social media mob at its finest.

Get out the pitchforks! Light some torches! We’re going to take down this PR firm that clearly has no idea how this social media thing or content marketing works! Tell us who they are so we can be certain not to work with them!

There were hundreds of comments. Some of the ones I’ve pulled are from people I consider friends or who are Spin Sucks community members. The same people who would support us in a crisis. 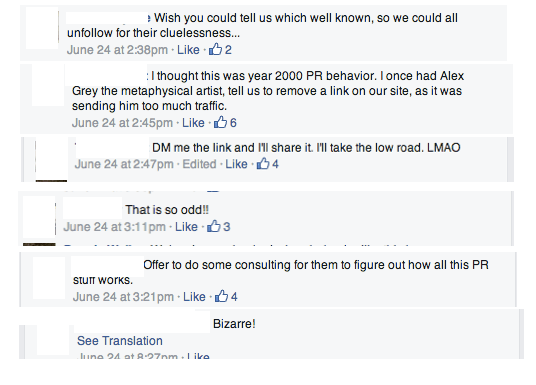 It also was construed that we represent Social Media Examiner and Cindy and were asking questions on their behalf. It wasn’t understood we were asking because the ad promoted Spin Sucks content and implied we support this company who paid for it.

We were asking because we wanted to fully understand how our content was being used in a paid media effort.

Though it linked to the blog post and was sending us traffic, we have a brand to protect and paid media presents a different set of things to consider.

In the end, we think it’s great what this company is doing. It’s different and new and does help drive traffic to other people’s content while building their own awareness.

The fact that they took it down without fully understanding why we were asking is a shame.

But the moral of the story? The reason I’m on my soapbox today?

Lindsay Bell-Wheeler, our content director, is our naysayer. She’s the one who, when I find something really inspiring online to share in Gin & Topics, will do a bunch of research to figure out if it’s true or not (the majority of the time it’s not and I get sad).

There are three sides to the story: Your side, their side, and the truth.

She has taught us to do the same. We don’t feed the social media mob. I, personally, never comment on stuff like that because I don’t have all the facts (even if I do sometimes allow myself to get worked up for the person posting).

That is the moral of the story.