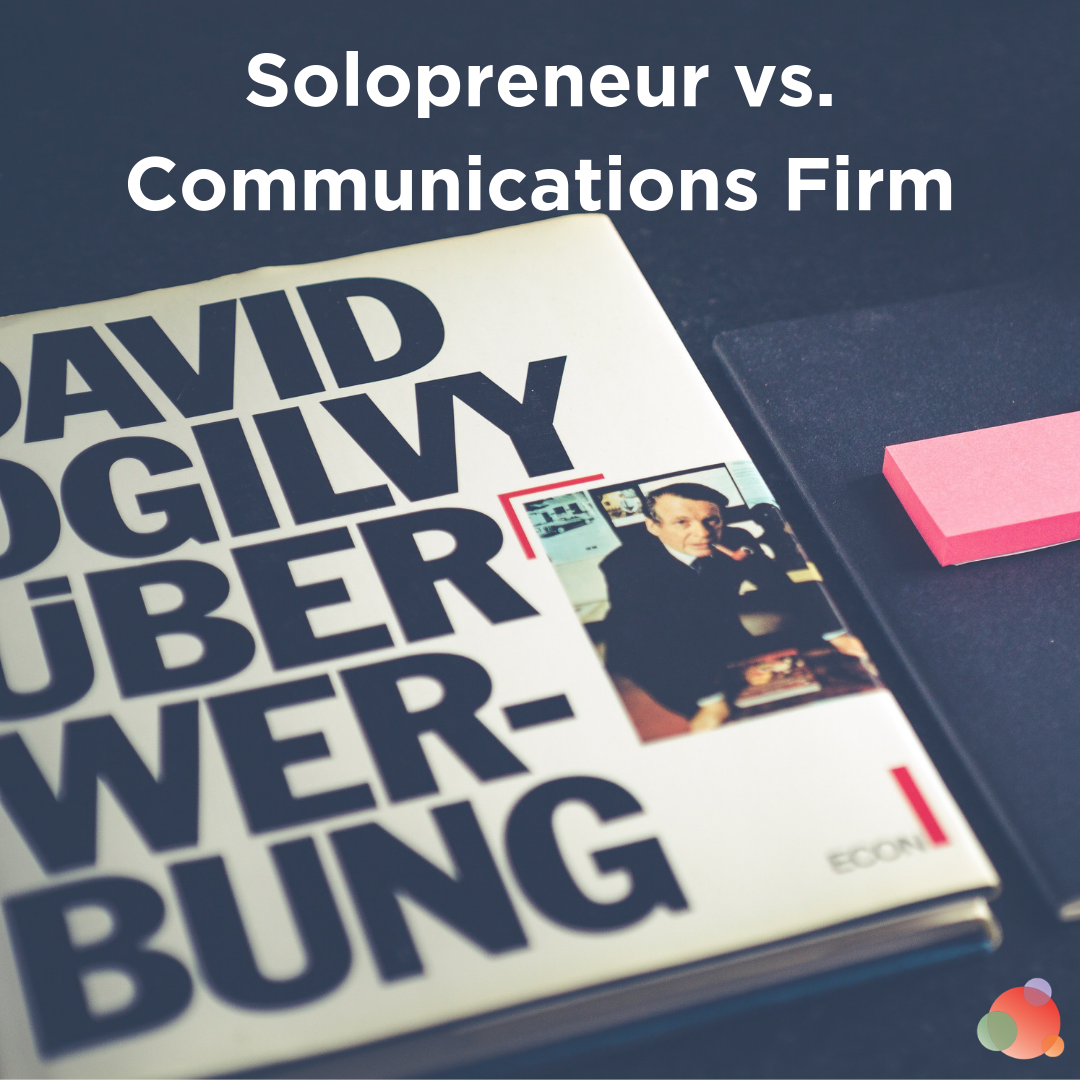 Editor’s note: It’s become clear I have used the wrong terminology in describing this debate. I hear you. I’m sorry. I’ve changed it to represent how people prefer to be referred to in today’s PR industry.

Back in the day, Paul Sutton and I would have large debates about all things PR-related…and we almost never agreed.

Sometimes one of us would play devil’s advocate, just to get the other boiling mad. But all-in-all, we like and respect one another—even if we don’t agree on a single thing.

For all intents and purposes, he is a solopreneur, though I would also label him a consultant, based on the type of work he does.

For argument’s sake, and the purpose of this article, we’ll call him a solopreneur, simply because he doesn’t have a team of employees.

Now that he’s nearly five years in, he still believes solopreneurs are the best option for organizations.

Of course, I run a digital communications firm, and I beg to differ.

I also have been a solopreneur…that’s what I did when I left my former agency, before I decided to build said communications firm.

So I see both sides of it and I see the pros and cons and benefits and drawbacks of both.

I still fall on the side of agencies are better.

Because we can’t agree, we have agreed to let you decide. You’ll hear his side and then mine. And then you can tell us what you think in the comments.

Just because you’re on Spin Sucks doesn’t mean you have to vote for me, but I do live in Chicago where people are strong-armed for votes. And you can vote often and early.

I’ve skirted around this a lot recently, but for this debate I’m not going to sugar coat things.

The fact is that agency structures benefit agencies, not clients.

Agencies are structured around hierarchies based on experience.

In the pitch you buy into what the directors (the most experienced team members) say.

But in day-to-day life you deal with account managers, and much of the actual work is done by juniors (the least experienced team members).

This simply does not reflect the way business has moved.

The days of recruiting for roles rather than skills should be long gone, but they’re alive and well within a communications firm.

The major issue with most agencies is that they haven’t adapted. The account director/ manager/executive model is outdated.

It puts constant pressure on the firm to meet payroll, and the best way to do that is to sign clients up to long retainers.

But more and more clients want to work on short-term projects, or series’ of projects, which is an environment in which experienced and skilled solopreneurs can and do thrive.

With communications, you get what, or rather who you pay for.

Just like Liam Neeson, I have a specific set of skills.

Hire me and you get those skills, not the dubious knowledge of someone who’s been in the job for less time than they spent in diapers.

Agencies, due to their nature, are inconsistent.

Pick a good independent consultant and you get far better value.

For a Communications Firm

Any business owner starts out with the idea that he or she can do things differently.

They either have a great idea or they have a different way of doing things.

The latter is why I went into business.

I really believed communications could drive sales and I was working on a way to prove it.

Now I have a way to prove it and all of our clients enjoy a hefty return on their investment with us.

But I couldn’t have done it alone.

In fact, if I were still freelancing, I would be bogged down in the work and not have time to think about how to innovate.

A few years ago, a friend and business advisor said to me:

He said I had to decide; it’s impossible to do both.

I thought about it and decided I had to forgo doing the work (for the most part) to focus on growing the business.

That decision afforded me the opportunity to grow this very blog, write two books, and go out on the speaking circuit, which all drive new business efforts for us.

It also has allowed us the opportunity to provide professional development for other agency owners, run one of the biggest and best communications communities in the world, and begin to certify marketers in the PESO model.

Now my job is coaching and training and business development.

My job is no longer the day-to-day work, but I have an enormously talented team to do that work.

Here is the advantage to our clients: they have an entire team of experts to work with.

If they need someone who has earned media expertise, they can call the director of that department here.

They also have a director of client services to better understand how it all integrates and the types of metrics to track.

And they have me for really strategic stuff, for stakeholder communications, and to trot out at their big sales meetings.

So, while a solopreneur might be really skilled at one of the four media types (or even two), they are still only one person.

A communications firm gives you lots of brains, lots of talent, lots of expertise, and lots of arms and legs to get lots of work done.

Which do you think is better: solopreneurs or communications firms?

Or maybe it’s both…but I won’t tell you why it could be that. That’s up to you!

Tell us in the comments!

I promise not to harass you (too much) if you vote for Paul.

Photo by Markus Spiske on Unsplash