We are 14 years old today…and what a trip it’s been.

To get here, we had to put the proverbial pen to paper on September 11, 2006. (I still don’t know why we chose this date. Clearly, we were not thinking straight).

I love to republish the very first blog post, both because it’s a good reminder of how horrible we once were and because it just goes to show, you have to start somewhere.

Here it is…in all its glory: 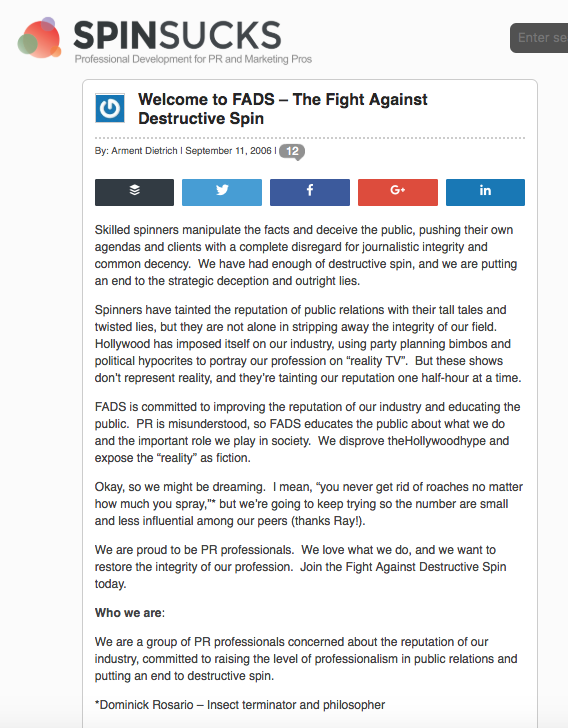 Skilled spinners manipulate the facts and deceive the public, pushing their own agendas and clients with a complete disregard for journalistic integrity and common decency.  We have had enough of destructive spin, and we are putting an end to the strategic deception and outright lies.

Spinners have tainted the reputation of public relations with their tall tales and twisted lies, but they are not alone in stripping away the integrity of our field.  Hollywood has imposed itself on our industry, using party planning bimbos and political hypocrites to portray our profession on “reality TV”.  But these shows don’t represent reality, and they’re tainting our reputation one half-hour at a time.

FADS is committed to improving the reputation of our industry and educating the public.  PR is misunderstood, so FADS educates the public about what we do and the important role we play in society.  We disprove theHollywoodhype and expose the “reality” as fiction.

Okay, so we might be dreaming.  I mean, “you never get rid of roaches no matter how much you spray,”* but we’re going to keep trying so the number are small and less influential among our peers (thanks Ray!).

We are proud to be PR professionals.  We love what we do, and we want to restore the integrity of our profession.  Join the Fight Against Destructive Spin today.

We are a group of PR professionals concerned about the reputation of our industry, committed to raising the level of professionalism in public relations and putting an end to destructive spin.

It Started Out as a Hot Mess

There are a few things I think important to point out:

We hit publish and we took a stance.

Over time, we evolved from FADS—the Fight Against Destructive Spin—to just Spin Sucks.

And we got much, much better at blogging, as a whole.

But yeah…it didn’t start out so well. It’s a wonder we kept it up.

The Results of 14 Years of Blogging

I’m thankful every day we kept it up, however.

Here’s why. Today we have:

And, because I wouldn’t let any of you get away without measuring revenue, I will hold myself to the same standard.

What started out in 2011 as a gigantic loss, slowly built to $239,000 in 2015. Last year, we surpassed the seven-figure mark—and have surprisingly maintained that through a global pandemic.

It was a big financial burden to the agency side of things (Arment Dietrich) but it finally became it’s own P&L—and truly its own business—a little more than two years ago.

It’s not been without its challenges. That’s for sure. Sometimes it feels like we are carving the path and we have beautiful lanterns lighting the way and no one is following.

Plus, it’s a completely different business model so working to figure that piece of it out has been both challenging and exciting.

I joke that I’m in the best shape of my life because my bike has taken the brunt of my stress this year.

As a Teenaged Blog

Now that we are fully a teenager, we have:

That’s according to the Montgomery Schools—and it’s applicable to humans—but I thought the traits worked for Spin Sucks, too.

So that’s what you can expect from us in the next trip around the sun.

We will continue to try new things and test what works and what doesn’t work; bringing you the results of our experiments.

We will continue to be curious and explore new ideas.

Artificial intelligence and machine learning top that list for us.

We don’t want to be blindsided by how that shapes our industry in the next three to five years–and don’t want you to be, either.

But we’ll mostly continue to focus a good majority of our efforts on you—our community.

It’s been said we have the best community on the internet.

I don’t know that we can boast the best on the internet, but we can say certainly say it’s the best in the communications industry.

And, for that, the thanks goes to each and every one of you.

Some of you have been with us for a decade and others have just discovered us.

You have met one another in person and formed real-life friendships or business partnerships.

You have helped people halfway around the globe with their business challenges and you have lifted one another up in ways others couldn’t.

Two of you even met in the comments here and ended up getting hitched.

I know I speak for myself and the entire Spin Sucks team when I say thank you.

Thank you for coming along on this wild ride with us. Thank you for being part of this crazy community. And thank you for trusting us to help you change the way you do your work, day in and day out.