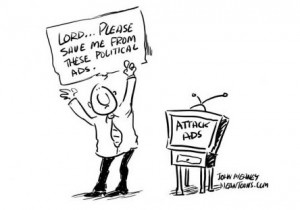 Before I begin, allow me to remind everyone the vision of this blog is to change the perception of the PR industry by highlighting both the good and the bad.

The bad, unfortunately, happens a lot in politics, so we can’t avoid talking about them. But we’re going to look at this from a bi-partisan perspective.

Especially right now. My goodness. I don’t know if it’s because I’m getting older or if this year seems especially polarizing, but it’s kind of astounding to me how both sides are behaving.

Last Thursday, the GOP released an ad featuring a disillusioned Obama supporter. In the ad, she expresses her disappointment and frustration with POTUS.

Which is all fine and dandy.

The “disillusioned Obama supporter” is actually a Republican National Committee staffer. She’s worked in Republican politics since before 2008, when Obama was elected. So it’s unlikely she ever voted for him, let alone became disillusioned after she did.

It’s a lighthearted ad to show how millions of Americans feel about President Obama — he’s not the person we thought he was and it’s time to break up with him. But let’s be clear, it is an ad.

Unfortunately, anyone watching the ad doesn’t know it features a RNC staffer pretending to be someone she’s not.

There is nowhere more rich with political baloney than the state of Illinois.

I mean, we have what? Four governors who have gone to prison?

A man running for Congress in the Champaign area (where the University of Illinois has its campus) is being blasted by the Democratic Congressional Campaign Committee for working with George Ryan (the third governor who went to prison…and is still there).

According to Capitol Fax, there are at least four misleading – or completely untrue – statements in the ad, including being “right in the middle” of Ryan’s corruption, even though he was right out of college when it all went down and wasn’t anything more than an entry-level staffer.

While I’d love to say the lesson is, “Don’t believe everything you see on TV,” I think there is more to do this.

The other side is always accused of lying and fudging the truth in order to get ahead, but it’s not just the side that you don’t believe in. Both sides are acting in poor taste, lying, cheating, and being completely and utterly dishonest.

A lot of us are content creators. Maybe we’re copywriters or technical writers or bloggers or authors. Whatever it is, we create content that helps our organizations gain credibility and build leadership in areas we haven’t been able to compete in the past.

We are responsible for gaining someone’s attention in the blink of an eye … and trying to keep it for more than 30 seconds. And that sometimes means being controversial or extraordinarily funny or having a gimmick that works.

But, under no circumstances, does that include lying or stretching the truth.

We can do better than this. Let’s show our politicans there is a way to win and be honest. It has to start somewhere, otherwise it continues to get worse and worse and our country becomes even more polarized.

Let’s do better than this.

After all, Spin Sucks.