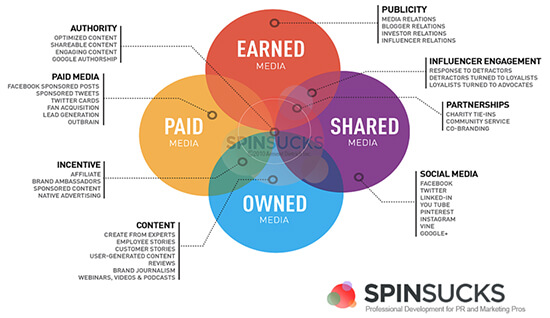 I (re)discovered the PESO model a month ago while working with my new PR professional, Delphine Sibony, to integrate some digital tactics within her more traditional tactics.

We worked through the model that Gini Dietrich created when she published Spin Sucks and found it might make sense to develop an animated version.

Why We Decided to Develop an Animated PESO Model

1min30 is a French digital agency specialized in inbound marketing.

For me, PR is at the heart of an inbound marketing strategy with some other techniques such as content marketing, SEO, and community management.

As my agency grew, I knew it was time to recruit a PR professional who has more than 15 years of experience, but with that often times comes someone who isn’t a digital native.

The PESO model is a great tool for me to explain how the four media cooperate.

Thus, in order to make the explanation more lively and use the tools to discuss with leads and convince them to adopt global strategy, we decided to develop an animated PESO model in HTML5.

And here is the result.

How We Use the Animated PESO Model to Pitch a Lead

We use the animated PESO model starting with paid and earned media— or the more traditional media.

Beginning of the pitch

At this stage of the presentation every circle of the animated PESO model should have been moved, but no circle should touch another one.

This is now the time to express how they integrate with one another.

End of the pitch

Feedback About the Animated PESO Model

Before ending the article I would like to thank Gini to have offered us the opportunity to write an article on her blog.

It is our first article on a U.S. earned media and we are very pleased that, as a French marketing firm, we are taking most of our inspiration from the States.

I would therefore be very pleased to have your feedback about the animated PESO model and the related pitch.

Please tell me what do you think about it and how we could improve our PESO Model ?

I also would like to invite all the French speakers to read our blog.

It is starting to have a good community in France with more than 80,000 readers every month.

Gabriel Dabi-Schwebel has started his career in 1996. He has been a consultant in the telecom and media industry as well as an entrepreneur. He has created several business including Soft4Energy, a Smart Grid software editor, and Litchi, a successful jewelry brand. Today, with 1min30, the first French Inbound Marketing agency, he offers customers unsurpassed expertise in digital technology and a proven, results-oriented team to handle your 360° marketing and communication needs.

View all posts by Gabriel Dabi-Schwebel