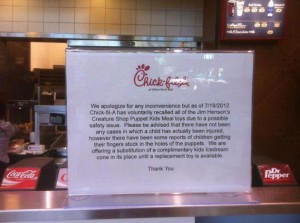 I’ve been in Canada all week, in meetings with clients, sitting in new business meetings with our Thornley Fallis colleagues, and speaking at Third Tuesday (and at SocialMix today). So I haven’t been able to keep up on the news as much as I typically do.

So when the Chick-fil-A fiasco hit my inbox earlier this week, I made a mental note to make sure I got back to it when I got home.

But then I learned they were creating fake Facebook accounts to tell their story and I knew it couldn’t wait.

For those of you who haven’t yet heard what’s going on, the story goes like this.

Of course that’s bad  enough in our day where parts of our population are not supported in certain areas (including Sally Ride and her partner, Tam O’Shaughnessy, who spent 27 years together).

Boston’s Mayor issued a statement saying Chick-fil-A is not welcome in the city. And our own Chicago’s Mayor echoed his sentiments.

Jim Henson’s company decided to sever its business relationship with the fast food company. The company released a statement saying it supports diversity and inclusiveness. It also said the company is using the payment it received from Chick-fil-A, for Henson toys in kid’s meals, to the Gay & Lesbian Alliance Against Defamation.

That didn’t sit very well with Chick-fil-A, which issued a statement saying the toys had been taken out of stores because of safety issues, not because Henson’s company publicly severed the relationship.

But that’s not all!

The statement wasn’t enough. They then took to Facebook to defend the decision by creating fake Facebook accounts.

Yes, you heard me right. They created fake Facebook accounts, particularly of one Ms. Abby Farle, who was on the company’s page defending their decision.

Because the comments seemed odd and by someone people on the page hadn’t seen before (and because you can clearly see she’s lying, based on the image you see above), they flagged the comments (talk about self-policing!).

What they found is the account had been created only eight hours earlier and Abby’s avatar is a stock photo of a pretty young redhead. 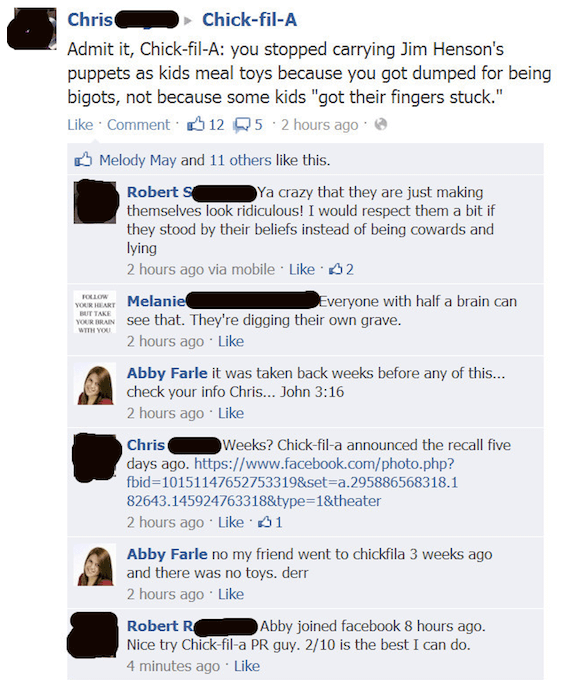 It’s one thing to take a stance on your beliefs. Chick-fil-A has long been closed on Sundays, not changing their policy even after malls began opening on the Sabbath. And, yes, we live in a free country so it’s their prerogative to support – or not – all Americans.

But creating fake Facebook accounts and lying about why toys have been pulled from their meals?

There is no room for it. Maybe they could have gotten away with it before social media and the age of transparency. Perhaps there would have been a small media war between the two companies – a he said/she said story.

But the people wouldn’t have been able to quickly discover we were being duped.

Social media provides an amazing opportunity to connect and engage with your customers – the happy and unhappy ones. But when you alienate people, lie, and create fake accounts to defend your position, you’re going to be found out.

Behaving this way doesn’t seem very Christian to me.

Update: Chick-fil-A released a statement saying they did not create the two Facebook accounts (one was deleted and the other was outed, as you see above).