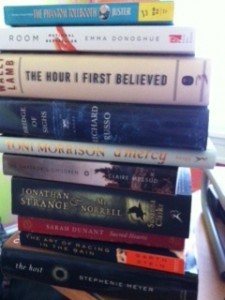 I’m a huge fiction fan. My senior year in college, I took a women’s literary course to finish out my English degree, and I remember sitting in the stairwell of the creative writing department reading. No one would think to look for me there so I could read, uninterrupted, for hours.

It was like I was six years old again, hiding in my closet where my brothers couldn’t find me, with a book.

And I loved every second of it.

Not much has changed, except now I read on my iPad and I’m better at tuning out interruptions. I read on the couch, in the hammock, in bed, while getting a manicure, on the beach, on the El, and even when I’m riding a stationary bike.

Because of that, I have read 26 books this year and have six to recommend you put on your summer reading list.

Of course, anything written by Gillian Flynn is aces in my book. I love her. My favorite was Sharp Objects, but you can’t go wrong with Dark Places or Gone Girl.

So there you have it. First half of the year equaled 26 books read and the six best recommended for your summer reading list.

I have a long list of books yet to read this year, but always welcome recommendations. What have been your favorite fiction books so far this year?

P.S. We’re going to try something for the next three months. So I can focus on some longer form content and test some of the ideas outlined in Increase Blog Traffic with These 12 Ideas, I am scaling back by three blog posts per week. I’ll be here Monday, Tuesday, Thursday, and Friday mornings. Wednesday morning, Gin and Topics, and The Three Things will be written by our team. We’ll report back in October!