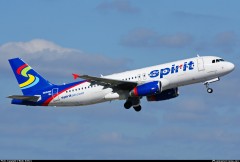 We talk a lot about reputation management on Spin Sucks.

How to deal with an online crisis.

How you must own the story before the story owns you.

And how, in most cases, the best way to resolve an online hate explosion is to apologize.

I mean, really apologize. Not the, “It’s too bad you feel that way, but..” kind of apology, but a real, heartfelt sorry.

What if you had the cojones to turn the hate into a cheeky marketing campaign?

That’s exactly what Spirit Airlines did, to great effect, in my humble opinion.

If you’re not familiar with Spirit Airlines, they are “…an ultra-low cost airline of the Americas and Home of the Bare Fare.”

You pay for your flight.

This type of low-rent travel is fairly common in Europe, not so much in America. U.S. travelers aren’t really… used to the concept yet.

Oh, they love the cheap flights. They just don’t love paying for the extras. And boy. Do they rant about it.

So, you have an *ultra* low rate airline, where, incidentally, the captain actually picked up the phone one day because no one else was in yet! LOL That’s pretty indicative of how bare-bones they are. And you have angry customers complaining about less than stellar service and extra fees.

But here’s the thing. They don’t pretend to be anything else. They make it very clear on their website that what you see is what you get. And they deliver what they promise you they are going to deliver – lower rates than the larger, ‘all-in’ airlines with massive overheads could ever deliver.

So, they decided to do something quite innovative – and a whole lot risky: They embraced the hate!

In a recent FastCompany.com article, their vice president of marketing, Bobby Schroeter, addressed the campaign thusly:

Some people don’t get it. They’re expecting the all-inclusive pricing that most legacy airlines charge. So when their experience isn’t what they were expecting, they like to vent. And the way a lot of people vent today is through tweets. Rather than pretend those tweets don’t exist, we decided to embrace them. While we are serious about saving people money on air travel, and providing a clean and safe flight, we don’t need to take ourselves so seriously that we can’t address some humorous vents from Twitter.

And address them they did! They created a hilarious, very cheeky little ditty that I call, well, “HATE”.

You can watch it below.

They also created a website called H8TEThousandMiles.com where people can come and vent their rage about Spirit, or about any other airline (they’re NOT stupid!).

They kinda sorta apologize on the H8TEThousandMiles site – saying, “Airlines mess up, but at least Spirit Airlines is willing to admit it!”

They are also offering customer incentives, a token to soothe the savage beasts.

But NO WHERE do I see them ever saying “sorry.”

I think this approach rocks in a number of ways.

What do you think of their approach? Do you think it’s clever? Would you ever try something as risky as Embrace the Hate?