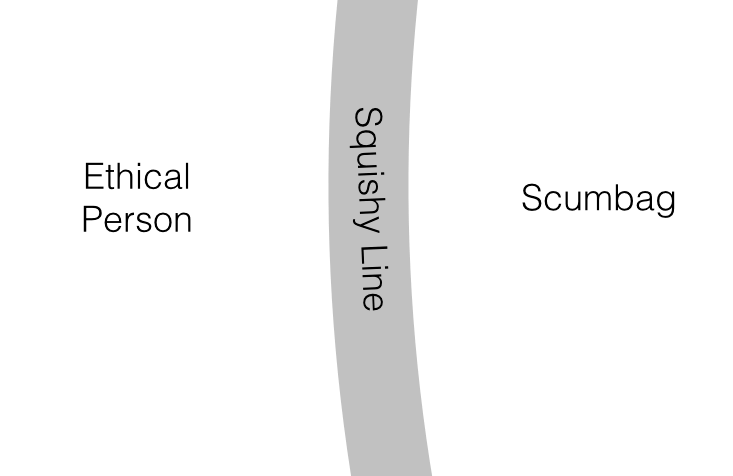 I recently had an opportunity materialize almost out of nowhere that would allow me to continue to grow Arment Dietrich and follow a serious personal passion by intertwining the two.

I went through the whole process and we agreed to terms and negotiated a bunch of really hard stuff. It pushed me way outside of my comfort zone, but I learned a ton.

As we got into the contract, though, there were some things they wanted me to do that felt very unethical. They weren’t things that were downright lies, but they felt squishy. They sat on the grey line of ethics.

When I questioned the things that bothered me, they said, “That’s just the way it’s done in this industry. Don’t worry about it.”

I finally said, “I have to worry about it. I can’t very well have written a book and manage a blog called Spin Sucks, and have built a reputation on my ethics and let these things slide.”

In the end, as painful as it was, I had to walk away from the opportunity.

It could have potentially been a game-changer. One of those things that you look back on in five or 10 years and think, “Wow. That was a really great decision.”

My mom and my team and some close friends who knew about it said they were proud of me for standing up for my ethics, but it still makes me sad.

The Squishy Grey Line of Ethics

I tell you this story because I just read about David Tovar, the former communications chief for Walmart, leaving the retailer because he lied on his resume and it reminds me of the itty, bitty, tiny decisions we have to make every day about our ethics and our reputations.

The story goes like this: His resume states he graduated from the University of Delaware in 1996. As it turns out, he walked during the ceremony, but he was a few credits short so he never actually received his diploma.

It’s one of those squishy grey line things: He did officially walk in the university’s ceremony, but the piece of paper that is mailed six weeks later never arrived.

So how do you represent that on your resume?

Of course, the right answer is to say you were four credit hours short of receiving your diploma.

Some organizations won’t hire you if you don’t have a degree. Others will question it and think, “Eh, it was an art degree and he’s proven himself in communications so it’s okay.” And others won’t even think about it.

It was discovered when Walmart did a background check as part of his promotion to senior vice president.

When asked about it, he was transparent, but executives said they wouldn’t be able to promote him.

Here’s what stinks: He was really, really good at his job.

As a communicator, I watched him with great admiration.

He’s the one who wrote the funny and sarcastic fact check blog post in response to the OpEd in the New York Times (something I think many of us have always wanted to do, but never dared).

He’s the one who helped tell the story about the great things Walmart is doing, while under fire for many of the political negative things.

He’s been out there, front and center, to discuss the good, the bad, and the ugly.

He’s been under fire and he’s managed things extraordinarily well.

He did not have an easy job.

To not get a well-deserved promotion because of a white lie, well, sucks.

The moral of the story, of course, is not to lie.

If it feels wrong, it is wrong.

And, while you may not be found out immediately (this took nearly 20 years), it will come back to bite you in the butt.

If he’d been honest to begin with, he may not have gotten the job at Walmart and his future would have been altered.

But he also might not be out of a job right now.