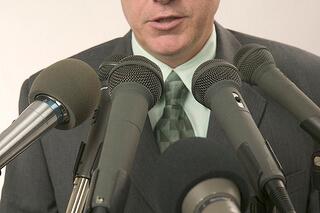 My brother-in-law—an engineer—recently reminded me that I had taught him the three rules for media interviews.

“They really work,” he said, with a big smile on his face.

Not because the rules worked, but because I honestly hadn’t remembered teaching him.

I started my working life as a journalist and eventually became director of communications for the media publishing company.

Soon, their presses started breaking down.

And then they became involved in a strike.

If there was a degree in “Media Trouble-R-Us,” I had earned it!

As a result, I developed my own three rules for media interviews.

The biggest error most companies make when facing the media is they go into full-on defensive mode.

Instead of vowing to “survive” the interview with a minimum of damage, convince yourself it’s your job is to convey your own three messages.

(And, when you accomplish this, congratulate yourself on your success.)

The best defense is always a good offense.

So, why only three messages?

The same reason there are three little pigs, three stooges, and three musketeers. And the same reason I have three rules for media interviews.

This will help you remember the messages yourself and will ensure your audiences remember them, as well.

When developing the key messages, make sure they answer the main questions reporters are likely to have about your story.

If your train has derailed, express concern for the passengers and describe your company’s commitment to safety.

If you’re laying off staff, explain why, and describe the (generous, I hope) severance packages.

If your CEO has died, express regret for the family and describe your succession plan.

Most importantly, make sure your key messages address the Why? How? Where? questions.

Then, use those messages to answer all the questions you’re asked.

Have Some “Turning Phrases” Ready

When a reporter asks you a question you can’t or don’t want to answer, have a list of phrases that will allow you to turn the question and provide the key message you have ready.

Don’t ever answer questions with other questions as that will make reporters see you as belligerent and provocative.

But you can redirect, if you do it in a respectful and friendly fashion.

Try to memorize the phrases above (or develop some new ones) so that you aren’t always “turning” with the same words.

Remember: The Microphone is Always On

Print reporters know they always get their best material after their notebooks are closed.

And TV reporters know they get their best stuff if the subject is unaware the camera is still running.

Obama: “On all these issues, but particularly missile defense, this can be solved, but it’s important for him to give me space.”

Obama: “This is my last election. After my election I have more flexibility.”

President Obama signaled that he’s going to cave to Russia on missile defense, but the American people have a right to know where else he plans to be ‘flexible’ in a second term.

It was a stupid mistake and one you need to arm yourself against.

You may have a cordial relationship with the media but they have a job to do, and it doesn’t usually involve helping you.

Always regard anything you say in the presence of a reporter as something that might appear on the 6 p.m. news.

What rules are you adhering to in order to make sure you’re getting the media attention you deserve?

Daphne Gray-Grant is a former daily newspaper editor, a writing and editing coach and the author of the popular book 8 1/2 Steps to Writing Faster, Better. Via her website, she offers the newsletter Power Writing. It’s weekly, brief and free. Sign up at the Publication Coach website.

View all posts by Daphne Gray-Grant