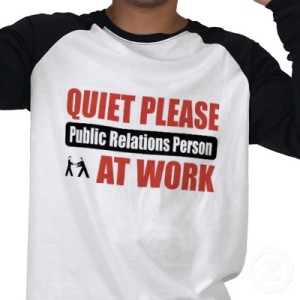 Just a little more than a year ago, the Public Relations Society of America set out to redefine public relations.

You see, it’d been 30 years since the last definition and, with all the turmoil the industry has seen since 2008, the organization thought it was time.

The definition they settled on is, “Public relations is a strategic communication process that builds mutually beneficial relationships between organizations and their publics.”

Sure, it’s new and most certainly better than what we had in 1982, but it still doesn’t describe what we do as communications professionals. The problem being, of course, most have the perception we’re publicists and our only task is to get our companies or client’s companies in the news.

As it turns out, though, it’s much, much more than that. Today it encompasses reputation management, customer service via the social networks, crisis communications, issues management, events, content and email marketing, lead generation, blogging, social media…and yes, media and blogger relations.

But the problem still lies, not just in the new definition, but in how communications professionals position themselves.

If you’re working with a PR firm or soloproneur or if you have a communications team in-house, there are some questions you should be asking to be certain they’re executing on business strategies that lead to real results (such as revenue or bigger grants or more fundraising dollars).

The 2013 “it” term for communications is content marketing. Everyone is talking about it and, if you don’t have it, you feel lost in the sea of conversation. Ask your PR professionals what they’re doing with content…and I don’t mean they’re slapping up a blog post a couple of times a week.

Are they using white papers and webinars to secure email addresses from prospects that can then be turned over to the sales team for qualification and nurturing?

Are they using a blog to build community and create thought leadership?

Are they using an eBook to send to prospects to determine his or her level of interest before you or your sales team spend time determining if it’s a good fit?

Do they know how to creatively use calls-to-action to motivate people to want to buy from you?

Content is, single-handedly, one of the most effective ways to generate and nurture leads. It must be educational, valuable, and not self-serving for it to work. Is that what your team is doing?

When I started my career, there were these big green books from Bacons that listed all of the journalists and producers at every newspaper, magazine, television, and radio outlet in the country. We would take turns with the books, sometimes copying pages from it so the next person could use them.

Then the books were bought by Cision and everything moved online, making a PR professional’s job easier because he or she could now create a media list with a touch of a button. And then Vocus came along and introduced a way for you to email all of your contacts at once, leaving time for things that really mattered, like making phone calls and inviting journalists out for coffee.

Of course, the system was gamed and, instead of using that extra time to build the in-person relationships, some professionals just sent emails and checked it off their lists.

In today’s world, though, with email spam and doing more with less, that approach doesn’t work.

Is your PR team spending time getting to know the journalist or blogger, by reading what they’ve already written and pitching a story hyper-targeted to them?

Do they send mass emails and never get a response?

Are they counseling you on what constitutes news and what does not?

Are bloggers fed up with the way they approach them and writing about their horrid media relations skills (it happens; do a Google search).

The idea behind blogger and media relations has never changed: It’s all about relationships. If you manage the relationships correctly, stories and blog posts will abound. If you mass distribute a news release that isn’t targeted very specifically, you’ll hear crickets.

It used to be you’d write a crisis communications plan and it would be shoved into a drawer until you reviewed it with your team a year later.

Now, because of social media and every customer having a megaphone, issues and crises can happen to even the most ethical and dedicated organization.

The difference between an issue and a crisis is you rarely hear about the former. In examples such as Susan G. Komen, Penn State, and Carnival Cruise Lines, they all had someone inside the organization who did something wrong, if not downright illegal. Those are issues. But, because the executives at these organizations either ignored or failed to act swiftly and decisively, the issues became crises.

Are you bringing your PR team in when an issue arises?

Do they know how to counsel you to go public with the issue so it doesn’t become a crisis?

Do they know how to monitor the web for red flags that might indicate an issue is brewing?

Can they minimize collateral damage when someone with a megaphone starts a grassroots effort against you?

Do you trust them to speak on your behalf on the social networks?

Of course, these are just three areas where communications professionals can help you and your organization. They’re not necessarily the three most important, but they’re in the top five.

Depending on what it is your organization does, social media or email marketing or product sampling may be more important, but the point is to get your team thinking about more than just building mutually beneficial relationships with your constituents.

If they can answer the question, “How are you going to help me reach my business goals?” and actually do it, you have the right team in place. If, however, all they’re doing is getting you stories that are great for your ego, but don’t help you reach your goals, it’s time to look somewhere else.