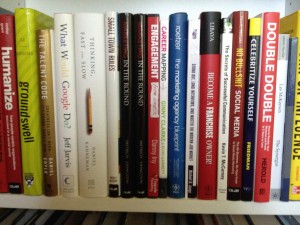 On Inside PR, Martin Waxman, Joe Thornley, and I took what was supposed to be a one month summer break.

Two months later, we got the band back together to get back in the groove and restart our weekly recordings.

One of the questions they asked me yesterday was how six months of book tour travel and speaking had gone and whether or not I’d self-publish my second book.

I tell this story when I speak so you may have already heard it.

Geoff Livingston and I signed the contract for Marketing in the Round in May 2011. It took us a few months to outline, research, and write the book. Then, during the holidays last year, we edited the bad boy. It was all due to the publisher the first week of January.

The book came out in May of this year. So it took a full year to hold something in our hands. It took another couple of months for people to read the book and write reviews. And, of course, we’ve both been speaking and selling books everywhere we’ve gone this year. It’s been a 17 month project (to date). No small feat.

But the thing that gets me? We have no idea how the book is selling. Sure, Amazon gives us stats (10 days delayed) on Author Central. But it only includes hard cover sales, no Kindle or bulk sales (which is the majority of our sales).

And the publisher sends reports. Quarterly. The last report we received was in June.

As a business owner (and someone who loves to see efforts tied to results), this kills me.

But is having a publisher the only way to go?

This was my first book and I would say yes. Sure, we’re in the digital age of DIY, but having a publisher has given me a ton of credibility in speaking and has afforded me the opportunity to increase my fees. It also serves as an amazing leave behind in business development meetings. Who doesn’t want to hire a published author ahead of someone who is not?

But there also is a slow creep toward self-publishing, like indie rock musicians and food truck restauranteurs have discovered. It’s not happening as quickly in our world as it has in those, but it is happening.

Perhaps fiction is different. You have mass appeal with a novel. Something you can’t achieve with most business books (particularly PR or marketing ones). I think I’ll ask Terry Fallis to weigh him, having just published his third novel (one self and two with a publisher).

But the reality is…we’re just a fickle bunch.

The instant gratification world we live in requires something new constantly. That’s why blogging and social media work so well. It’s why YouTube stars are made. It’s why half of the new titles published in 2011 were self-published.

Either the public will love you and reward you or not.

But you’ll know in an instant; not in 17 months. And, if they don’t love you, the time and effort spent can be better invested elsewhere as you figure out what’s next.