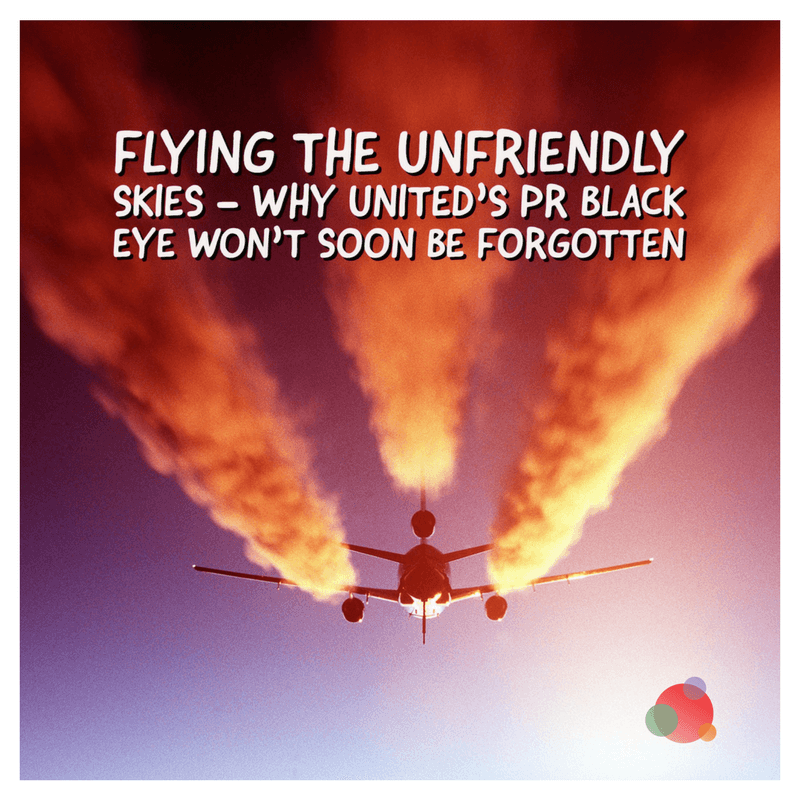 Oscar Munoz, the CEO of United Airlines, woke up the morning after a passenger was violently dragged from his seat on a flight, and he was faced with a sobering reality.

His brand has been irreparably damaged because of quite possibly the worst decision ever made by an airline.

The sad part is United could have avoided this whole incident, which played out nearly live over social media, had cooler heads prevailed.

Try to find someone who hasn’t.

It was viewed more than 10 million times in less than 24 hours.

It has been covered by hundreds upon hundreds of national and international media outlets.

The hashtag #Flight3411 quickly became a trending topic on Twitter.

How This PR Crisis Started

Chicago aviation security officials ripped a man from his seat and violently dragged him off an overbooked United flight.

He declined to give up his seat for $1,000 in flight vouchers.

After smashing his face on the seat rest, he was dragged on his back—dazed, his face bloodied—down the aisle by Chicago aviation, with outraged passengers taking videos and photos of the incident.

The reason he was being bumped from the flight?

Yes, you read that correctly.

This happens thousands of times a day on airlines.

Usually, passengers agree to compensation in exchange for their seats at the gate—before they board the plane.

The passenger refused to voluntarily give up his seat.

He objected to having his seat taken involuntarily.

And the situation escalated to the point that it may forever tarnish the United brand.

Let’s take a look at the three crucial mistakes made by United that led to this unfortunate situation becoming a PR crisis.

Lack of a De-Escalation Strategy

United officials at the gate seemingly ignored standard de-escalation strategies that could have easily mitigated the situation.

Instead, it became a PR crisis because this ugly scene played out live in front of a couple hundred people—and millions more online.

Conservative estimates put the number of views of the video at more than 100 million and counting.

Either United didn’t have guidelines for mitigating situations such as this, or employees ignored them completely.

In either circumstance, this was a critical error that led to the heated situation escalating to the point of no return.

Airlines bump passengers for any number of reasons, from overbooked flights to weight issues.

It is a stipulation in the airline’s contract of carriage—terms and conditions that every passenger agrees to when purchasing a ticket.

Forgetting Every Passenger is a Journalist

United made critical mistakes, including the cardinal sin of forgetting that cameras are ubiquitous in the digital age.

The PR crisis has already begun.

The Chicago Department of Aviation played a role—perhaps the biggest and most damaging role—in the incident, when security officials refused to back down.

Instead they took the unusual, if not extremely rare, step of forcibly removing a bumped passenger in a violent manner.

Ultimately, the blame lies with the officer who dragged the semi-conscious passenger down the aisle while cameras recorded the disturbing scene.

There were three officers that responded to the call.

The senior officer on the scene had a duty to intervene, and did not.

Incidentally, CBS News reported the Chicago Department of Aviation has since placed the officer on leave pending an investigation of the incident.

The Non-Apology Statement from the United CEO

Mr. Munoz made the situation even worse—which seemed impossible—by issuing an official statement that apologized for “re-accommodating” the bumped passengers.

He further promised a “detailed review” of the incident.

However, an internal United memo was later leaked to CNBC, and quoted Munoz as claiming the man was “disruptive and belligerent.”

Munoz appeared to double down on the notion that the airline and its employees went “above and beyond to ensure we fly right.”

Mr. Munoz can rest assured the employees did not act in a manner of compassion with regard to this passenger.

Any semblance of contrition immediately dissipated at that point.

Unfortunately, Mr. Munoz made the second critical communications error when he sent the internal memo to employees.

The golden rule of dealing with the media is if you don’t want it reported, don’t say it out loud.

Definitely don’t communicate it in writing, even if you expect recipients to treat it as confidential.

All it took was one indignant United employee of more than 86,000 to allow the memo to extend the story, further escalating the PR crisis.

There’s no hiding in the age of social media.

If United Airlines truly wishes to embark on a journey to repair its image, it must start at the top with Mr. Munoz taking responsibility for the incident.

Once that happens, he can present a believable plan that will prevent a situation like this from taking place ever again.

Short of that, this incident and its resulting PR crisis could be the death knell for the once great airline.

Roland Alonzi is a 20-year travel and tourism PR veteran and has represented international and domestic destinations and global hospitality brands. His career includes extensive crisis communications experience. He is a senior account supervisor at The Dalton Agency in Atlanta.

View all posts by Roland Alonzi