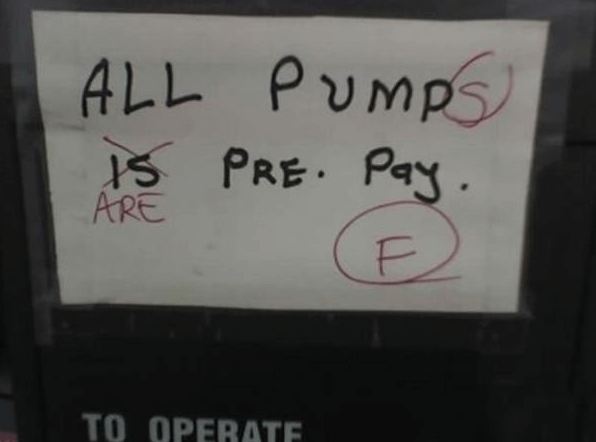 We all know how irritating advertisements can be, which is why TiVo was first invented (and then copied by every cable company on earth).

Ads surround us nearly everywhere—in the sky, on the ground, and even underground.

Do you know what is even more annoying?

The grammatical errors or typos in some of those advertisements.

A lot of people get upset or irritated by the grammatical errors found in the messages of famous brands. We expect to see a high level of accuracy and responsibility from respectable companies.

As a result, a brand risks losing its prospective customers and harming its reputation.

But sometimes the grammatical errors are intentional, and it’s up to us to understand the difference.

Intentional grammatical errors can be used to build a successful business. 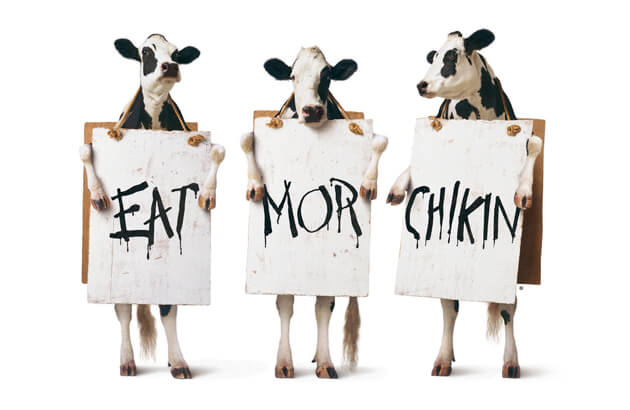 Though this marketing technique harks back to the early twentieth century, many companies continue to use it to their advantage.

The spelling reform movement at the beginning of the twentieth century greatly changed the marketing communication strategies of major companies.

This movement was aimed at making it easier for children to learn English and more profitable for advertisers to promote their products by reducing printing costs as the words became shorter.

The proposal was to remove silent letters in some of the words (catalogue and catalog), replace the -t with -ed endings (addressed and addresst), and focus on the way a word sounds and write it correspondingly (night and nite).

As Dr. Louise Pound notes in her paper, “Spelling-Manipulation and Present Day Advertising” (1923), marketers were eager to use the new rules of orthography resulting in messages such as “Soft Sole Kosy Toes slippers” and “Electric Auto-Lite Company.”

Dunkin’ Donuts also followed this approach by choosing donuts instead of doughnuts for their brand name.

Although the reform was never legalized, this kind of “manipulated spelling,” as Dr. Pound puts it, is still very popular among companies trying to save some money and be more memorable to their consumers.

The trend of grammatical errors in advertising is not used exclusively on billboards and TV commercials.

With almost endless possibilities digital marketing gives us, it isn’t very risky to apply this technique to your campaigns. 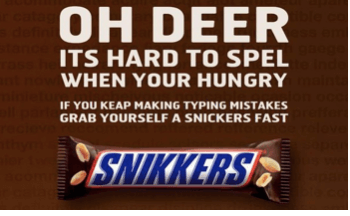 Through Google AdWords, they bought 25,000 of the most popular grammatical errors and misspelled search terms. Every time you typed one in, you were redirected to their campaign page.

They generated about 500,000 clicks and created some serious buzz around the brand.

Another example of this trend is your business name, which becomes your URL.

Some of us can no longer imagine our existence without Flickr, Tumblr, and Digg.

The reason behind their improper spelling is because someone already owned Flicker, Tumbler, and Dig online.

That required them to find a new name, but not necessarily change their name.

So they misspelled it.

This phenomenon of creating names from a grammar aficionado’s nightmare has become a real branding trend in a digital world.

To influence your prospective customers and “manipulate” their minds, improper use of punctuation can also come in handy.

Every marketer knows the message of any advertising campaign should be short, powerful, and comprehensive.

Therefore, there’s no need to write copy of full sentences.

Their copy says: “Great skin. Guaranteed. Or your money back.”

The punctuation here has a clear goal of emphasizing each claim and making it more memorable.

There can be multiple examples of using intentional grammatical errors in marketing.

No matter how small your budget is, you can always afford yourself making a little mistake to attract the attention of your consumers.

Even the titles of Hollywood movies are not always perfect.

The idea is to make them sound and look better and more appealing to the audience.

But, if your goal is to write a flawless text with no errors, make sure to double-check it using a professional writing service to avoid possible disappointing results.

Martha Simons is a copywriter from New York. She has five years of marketing experience and helps businesses become more visible for their prospective consumers.

View all posts by Martha Simons