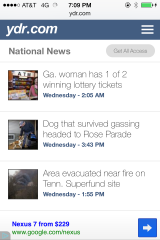 When I started talking about dayparting in a newspaper newsroom, the looks I received were crazy.

I remember one editor asking if I understood I was not at a television station.

Dayparting has a dramatic affect on readership, and if done properly, can increase the number of eyeballs on your content.

For three years, I was editor and publisher for a small paper in Texas.

The Aransas Pass Progress was in a fishing community that also had a large “Winter Texan” population – folks who left the north during winter.

The end result was nearly 75 percent of the newspapers we sold were single copy. Rather than subscribers, we had a lot of people who went to a rack or the store, and plopped down their quarters.

This was good because our profit on a single copy sale was much greater compared to a subscription, but there was an inherent danger.

I remember one day when a press malfunction caused the paper to be about an hour late. Sales plummeted more than 70 percent that day.  The worst part? Our competitor was selling out all over town. People weren’t just not buying The Progress, they were turning to our competitor.

It was very rudimentary dayparting. We had to be on the street before 6 a.m. or we’d lose our audience.

At my last newspaper, I really began to study our digital traffic and, as I did, I began to notice a few things.

Right before noon, there would be another crest of desktop, and a surge of mobile during the lunch hour.

There would be another desktop surge right before 5:00 p.m. and then in the evening we’d see a surge in tablet use.

What Did I Surmise?

A person wakes up and grabs his phone. He’s checking something. News updates? Weather or traffic?

That night, he’s playing on his iPad while watching TV.

So we developed a dayparting schedule that looked something like this:

What Were the Results?

Despite being behind a paywall, we began to see an increase in pageviews. We also saw more social media engagement, especially where commuter news was concerned. People began tweeting traffic updates to the morning editor.

The commuter report quickly surpassed the “centerpiece” or the big story of the day as the most read story each morning, up until about 8 a.m.

Video viewership began a 10 percent climb from the previous month. This trend persisted up to my departure.

The key was we were not only giving people the content they wanted, but we were giving it to them when they needed it.

We even see it right here on Spin Sucks blog. If there is a technical glitch and we’re a couple of hours late publishing, the traffic drop is substantial. You’ve come expect to see a new Spin Sucks post at specific times each day.

Put Dayparting to Work for You

You must have data for dayparting to work effectively.

You’ll need to do three things to obtain that data:

If you discover 20 percent of your traffic consists of people reading on their mobile phones between 11:30 a.m. and 1 p.m., it is safe to assume they are reading your content while eating lunch. Therefore, it might be a good idea to make sure you have fresh, strong content in place and published by 11 a.m.

Think about platform. iPads were just made for video.

If your analytics reveal a significant amount of people are viewing your content on the iPad or similar tablet, you want to make certain you have video available for them at that time.

Don’t be afraid to experiment. When we started shifting local restaurant profiles to the 11 a.m. hour, it seemed so natural. People want to know where to go eat for lunch, right?

However, it simply didn’t generate the traffic we expected. After a couple of months of tweaking the content, we shifted our strategy.

The key is to think, to tweak, and to experiment.

Yes, you’ll have to make some guesses, but you’ll make them with data in hand, and that makes all the difference in developing a successful dayparting plan.