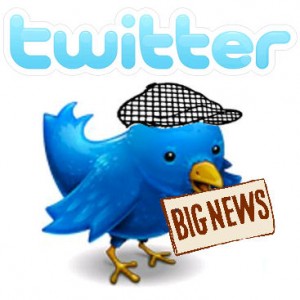 I’ve never been a fan of the news release.

I’ll go ahead and put it right out there.

I think it makes PR pros lazy and clients too controlling. And it typically has no real effect on whether or not a journalist covers your story.

In fact, earlier this year, I wrote, “No One Cares About Your News Release” when asked if it was OK to post your news release, verbatim, on your blog.

Can you imagine if we did that here? How quickly would we lose you? I’d venture to guess it’d be in masses.

That is because most news releases (and I say most because some people actually understand the value of telling a great story in a news release format) are dull, boring, and full of technical mumbo jumbo that no one cares to read.

Heck, by the time it’s finished, you’re probably bored with it.

At first I thought, “Nooooooooo!” and then I realized it’s actually a pretty interesting use.

Just before noon today, about 20 lawmakers and public figures were tweeting about the economic benefits of the DREAM Act, which offers some young undocumented immigrants the possibility of citizenship. The spate of #DREAMeconomy tweets — organized by the Center for American Progress to promote their study out this morning — were a notable example of what is fast becoming the new press release for a media and political class that lives on Twitter.

But that’s not really the story. The story is which influencers and notables tweeted – and spread – the story.

CAP, the organization responsible for the study, did not issue a news release. They did, however, provide lots and lots of content and a cool infographic showing out the DREAM Act can benefit the economy.

This isn’t about politics or whether or not you agree with the DREAM Act. This is about a very interesting and cool way of using Twitter to disseminate news.

But you notice, still, there is not a news release attached with this case study.

Rather, they created some really good content, they built an infographic, and they approached influencers asking them to donate a tweet or two.

So why is it only non-profit organizations are doing this?

It’s not new. It’s not innovative. But it is different.

We’re all accustomed to doing media and blogger relations, to working with influencers, and to creating content.

So next time, rather than painstakingly writing that news release no one will pay attention to, why not think about your news in a different way?

Get your influencers involved. Give them all the resources they need. But don’t pretend to write the story for them through a dull and boring news release.