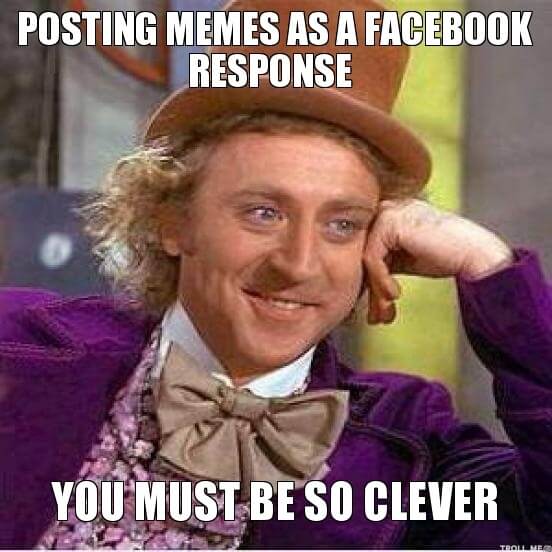 People talking about ALS and then dumping a bucket of ice cold water on their head.

Unless you are Patrick Stewart, who had, by far, the classiest ice bucket challenge video, it feels like a gimmick…and I’m not a big fan of gimmicks.

I didn’t like the ice bucket challenge and still don’t.

I have to admit, though, it is working.

As of this writing, more than 2.4 million ice bucket videos have been uploaded to Facebook, and the Amyotrophic Lateral Sclerosis (ALS) Association has surpassed $100 million in donations.

Given their previous budgets, I’d say it is a pretty successful campaign.

Most of my Pinterest time is usually looking up memes.

I think this annoys my wife as it usually happens when she’s watching something on TV and I’m sitting next to her. And I take sharing quite literally.

I admit I have a hard time seeing the value of a meme, even after Thomas Ford’s compelling argument on Spin Sucks at the end of 2012.

That said, we can’t deny the appeal of a meme.

We see them all the time and we laugh, or we nod our head in agreement that yes, indeed, Kony (His first name is Joseph, by the way. Memes never mention that.) should be brought to justice.

But still, when was the last time you were motivated by a meme?

Big Differences in the Common Ground

Memes and viral videos such as the ice bucket challenge have a few things in common.

First, they are very visual. Memes use iconic images or pop culture images like Walking Dead or Game of Thrones to help make a point. 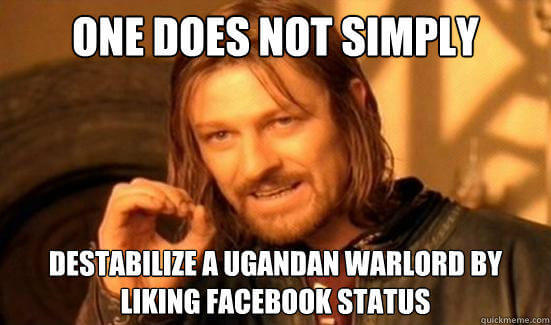 Similarly, the ice bucket challenge works because we see our friends and family, as well as celebrities, jump in there and make funny faces or develop creative ways to take the challenge.

Even when another point is to be made, it works.

This is akin to Matt Damon’s ice bucket challenge, in which he poured toilet water on his head to make a point about the lack of drinking water.

Though don’t we all think at least of little of Damon’s approach was flagellation in repentance for making We Bought a Zoo?

The big difference is relational.

We relate to the ice bucket challenge. We see our friends doing it and hopefully somewhere in there we learn a little more than we knew about ALS. That leads to a donation, or better yet, an ongoing donation.

A Call-to-Action is Necessary

Also, the ice bucket challenge has a clear call-to-action. When challenged, you are told to dump cold water on your head, make your donation, and challenge three of your friends.

The Kony memes do not have a call to action and they do not tell you to grab your Rambo outfit and hop a plane to Kampala.

Heck, they don’t even tell you to write your Congressman or Congresswoman and ask them to make this horrific situation a foreign policy priority.

And this is the problem with most memes—they lack a real call-to-action.

But there is still a problem with the ice bucket challenge.

One hundred million dollars is a lot of money. The viral videos have created a lot of awareness, and these can be used to fight the dreadful disease that is ALS.

However, it should be more. There don’t seem to be any hard and fast numbers on unpaid commitments, but one estimate placed potential earnings at 40 percent higher than actual earnings had everyone who has taken the challenge donated $100.

This 40 percent number seems to coincide with other organizations and commitments made to them.

Also, the organization itself, under scrutiny, has admitted that historically only 27 percent of its donations goes to fund research and cures.

Then there’s this question: What happens next year?

How does ALS sustain $100 million-plus giving?

How Can You Handle Going Viral?

Let’s say you are planning a campaign, a contest, or an effort. It includes video, memes, infographics, or some other visual approach.

First, when creating a visual message, it is important to connect the dots.

How is this video related to fighting a disease, selling a book, or deposing a Ugandan warlord?

Second, what is the action you want me to take? Have a call-to-action and, like connecting the dots, make it clear.

Finally, if your video or meme do go viral, be prepared.

Do you have the infrastructure to handle a surge of donations, orders, or investments?

Criticism and scrutiny will come. How will you deal with the “I don’t like that” critics?

If a skeleton is discovered, do you have a plan for dealing with the criticism?

What about next year? You may strike viral gold twice, but it isn’t likely.

Have you developed an integrated marketing plan to turn those one-time customers into repeat customers (or donors)?

It is visual content that goes viral. When it happens it can be very exciting for you and your client, but it presents unique challenges.

Your planning and your reaction will dictate the level of excitement—or pain—you or your client feel with the virus hits.