Chicago hasn’t let them build in the city so I don’t ever have reason to go there. But I was inside one when I was home for Christmas and it was a dark, scary place.

I much prefer Target with its bright lights, wide aisles, and cart escalators.

That said, I have a serious brain crush on the company’s vice president of corporate communications, David Tovar.

They are being applauded for their community assistance efforts and are making a bigger deal about not just communicating the great things they’re doing, but really living them, too.

On June 20 (my sister’s birthday!), Tovar published a blog post that copy edited a piece that ran in The New York Times the day before.

We saw this article in The New York Times and couldn’t overlook how wildly inaccurate it is, so we had some fun with it. I hope you will too.

Then he went on to publish the article in its entirety with little edits-in red ink-along the side. 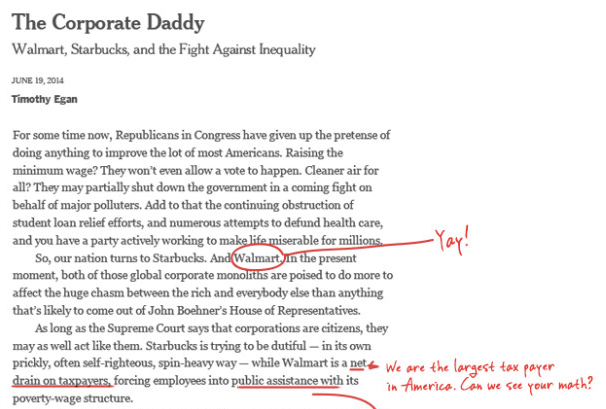 It’s done in jest, but it gives you great insight into what the company is experiencing with bias from the media.

Sometimes the Media is Just Wrong

As communicators, we’ve all been in a situation where what the media has reported is false. We’ve likely all had to ask for a retraction at some point in our careers.

We have a client who was part of a class action lawsuit in 2007.

Before the case went before the judge, our client was able to prove they were not part of the situation and the case against them was dropped.

Problem is, that information was never taken from public record so, when USA Today reports on what’s going on in that city, our client is named as one of the largest violators.

Their in-house counsel has been working for six years to get it removed from public record (we all know how slow bureaucracy is), so we thought we’d try the media relations approach.

We took the legal documents that clearly state our client is not involved to the paper. Their response? “As long as it’s part of the public record, we can’t change the story.”

Even when presented with the facts, they refused to change their story or include an update.

In this particular case, it would be nice of the European Union’s ruling against Google worked in the States. We could have that information wiped from the web.

Approach is Brilliant and Creative

What Tovar did to the Times piece, on behalf of Walmart, is not only brilliant and creative, it works.

It used to be we’d make a phone call or write a letter to the editor and hope the paper printed it.

Today we have the opportunity to use our owned media to take a stance.

But throw caution the wind: It can only work once…maybe twice. And only if you have an established blog with an engaged community. The rebuttal must be totally accurate and you must be able to back it up with facts, not just opinion.

Elon Musk did the very same thing with the very same paper when they published a scathing review of the Tesla, which cost the company $100 million.

He took the car’s computer data and proved the journalist was wrong in his assertions, point-by-point.

If the stars are aligned, this is a very creative way to realign public opinion with the facts, not bias, and potentially save your organization lots and lots of money.