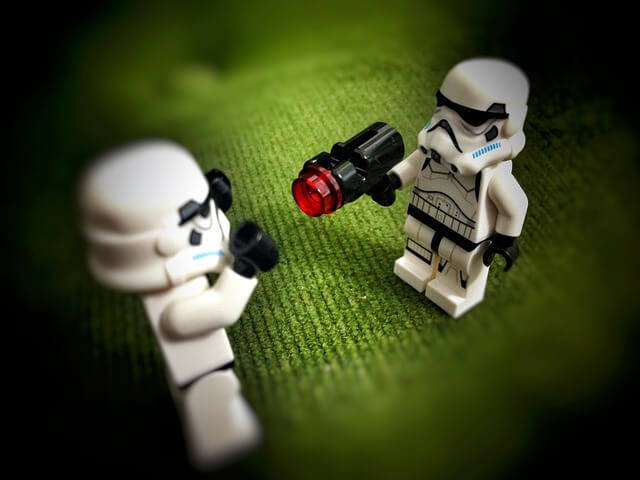 Our world is filled with a constant stream of marketing and brand recognition efforts. If a company wants to make money, they need people to actually know they exist.

Some brands, however, are past this.

Everyone knows who they are.

Possibly the most notable example of this is the most recognizable entertainment franchise in the universe: Star Wars.

The popularity of Star Wars is so massive that it falls into a category all to itself. As demonstrated by Movoto, even when compared to the second largest sci-fi franchise, Star Trek, Star Wars is lightyears ahead.

Star Wars doesn’t need to market itself, really. There is no possible way for them to be any more recognizable than they already are.

This is especially true with the upcoming release of Star Wars: The Force Awakens less than 100 days away. Recently, however, an unfortunate marketing misstep left a sour taste in some Star Wars fans’ mouths in the form of a blundered toy release.

By looking at the fallout from Force Friday, however, there are some great PR lessons to be learned.

Going back to the original trilogy, toys and merchandise have been one of the largest aspects of the franchise. Leading up to the release of The Empire Strikes Back, fans were in a fervor to get their hands on a Boba Fett action figure (a character that had not yet even appeared on screen), and the market for Star Wars toys have stayed strong throughout the years.

With hype surrounding the upcoming release of Star Wars: The Force Awakens building to almost impossible levels, Disney decided to do everything they possibly could to continue this tradition with the film’s toy line.

T do this, they knew they needed to do something really big.

How does one of the largest companies in the world do this for the most iconic franchise of all time?

Force Friday came on September 4th, and marked the first opportunity to buy toys from the upcoming film. This idea actually seemed to work, and people lined up for special midnight releases.

However, by the time these fans filed through checkout lines and returned home, perception of this event had changed. Stores were far from adequately stocked, and many were completely missing certain toys. At other stores, employees didn’t enforce buying limits.

Still getting caught up on how awful Force Friday was for so many people, and wondering who is to blame. Hasbro? Disney? #FarceFriday

The toy game sure is a rat race. I bet everything’s on eBay… #FarceFriday Was A Disaster For Many Star Wars Fans http://t.co/kfn1snLhcg

There was a great disturbance in Twitter, as if millions of voices cried out in terror, and then couldn’t be silenced about it.”

The number of Captain Phasma @starwars figures on eBay continues to disgust. So many #farcefriday stories I read involved missing that one.

In other cases, fans have complained about poor quality in some of the toys.

The lack of available products, combined with poor quality are classic signs of rushed overseas production. This oversight on the part of Disney should have been predictable. They know how long it takes for their toys to ship to stores, and they should have been able to predict the high demand, and therefore made sure that there would not be a shortage.

This is a great reminder to always use the data you have available to anticipate potential issues and take steps to prevent them.

The Nostalgia is Strong With This One

The failures of Force Friday, and the overall story of the Star Wars public perception serve as great lessons for the PR world.

For a long time, George Lucas seemed to be trying everything in his power to alienate loyal fans and consumers. From his strange, and almost universally hated additions and changes made to the original trilogy when they were re-released in the 90s, to the equally hated prequel trilogy, Lucas seems to have completely lost touch with the fans that have made Star Wars the cultural phenomenon that it is.

The marketing push around The Force Awakens and all of the new Star Wars films have largely been based on returning to what people once loved about the original trilogy.

With Lucas now out of the way creatively, Disney has the ability to redeem this franchise by going back to basics. Any sour taste left in the mouths of fans by Force Friday are so small in comparison the disappointment of the last 20 years of Lucas’ decisions that they seem to be quickly forgotten.

This highlights why the marketing push for The Force Awakens has been largely successful, despite some missteps, as well as a very important lesson for every brand to pay attention to: give your fans (consumers) what they want, and learn from your past mistakes.

Force Friday may have been a disappointment to many fans, but it did not ruin their excitement for The Force Awakens or the other new Star Wars films.

This shows that if you consistently practice good PR and listen to consumers, you can buy yourself some breathing room when it comes to an eventual misstep.