I wrote the first draft of this post by hand.

I’m trying something new: I’m going to occasionally step away from the devices, limit distractions, and reflect.

This is much easier said than done and I”ll explain why in a minute.

But first, the reason for this little epiphany: Candy Chang spoke last week at Counselors Academy in New Orleans. Some of you know this is my absolute must attend conference. Candy was the keynote the last day and honestly, I had pretty low expectations for the session.

Well, I was quietly blown away. I say quietly, because she had a very calming, meditative effect on the audience. While we’re so used to being blown out of the water by energy, this time, we were led through a thought-provoking, contemplative session.

Candy is an artist and an urban planner. What a cool combination; I seriously want to start over and do that. In a previous chapter of my life, I was in urban development and I wish I had one tiny fraction of her creativity. Her projects have brought life and vitality to blighted properties all over the world.

For example, she took Fairbanks, Alaska’s tallest building which had been abandoned decades ago and had a graphic installed that said, “Looking for Love, Again.” 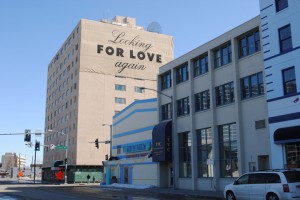 Talk about an emotional connection! It’s such a simple distinction, but far more powerful.

And at the street level, chalkboard walls ask the community what they want there:

“My hopes for the Polaris Building…”

It’s simple market research but done in a way that is far more inviting than a focus group or Survey Monkey.

Other favorite projects involved doing things like, putting sticky notes on vacant storefronts that said, “I wish this was….” And chalkboard walls on abandoned buildings that said, “Before I die, I will…..”

As she described these projects, she made me realize something:

Social media is not purely digital.

I know, I know, you already thought of this. But I’m a perpetual late bloomer so it’s only hitting me now. We always compare social media to networking events and cocktail parties, but I’ve never considered how traditional media can still be social.

Here’s what happened: She created these installations not having any idea how people would react, and in return, she received these fabulous stories. People are starved to share their stories, and need to be given an outlet in which to do so.

Backtrack again to when I was involved in urban development; we were busy trying to put up creative construction walls that talked all about the project and the company. It goes against the very grain of everything we do in content marketing, right? Instead, Candy Chang asks passersby for their input, their dreams, and their desires.

Candy presented many ideas from which we can shamelessly steal and apply to our own projects and campaigns, but the bigger point is this:

How can we look at things differently?

Where do big ideas come from? They come from slowing down and being present. This means we don’t necessarily pull out our phone while waiting for the bus or the doctor, and check in on Facebook or Twitter.

It means after all the stuff we write and blog about on how to make those five minutes of downtime productive, instead, we could actually consider stopping and reflecting.

I don’t even think I’d know how to do that; would you? Given five minutes to rest my forehead against the window pane, I’d start to think about what to have for dinner that night, or what’s on my to-do list.

As we drive through the Columbia River Gorge on a Sunday afternoon and I type this from the passenger seat (the second draft!), I look out at the landscape, and wonder how to even begin to reflect.I’m not sure there is a process, but taking time each day to do so, can only somehow bring the answer to the surface, and that’s what I will work on. I’ll be sure and report my findings!

Given a blank slate, no problem to solve, what would you think about? How would you tackle reflecting? Oh, and isn’t Candy Chang ridiculously creative?