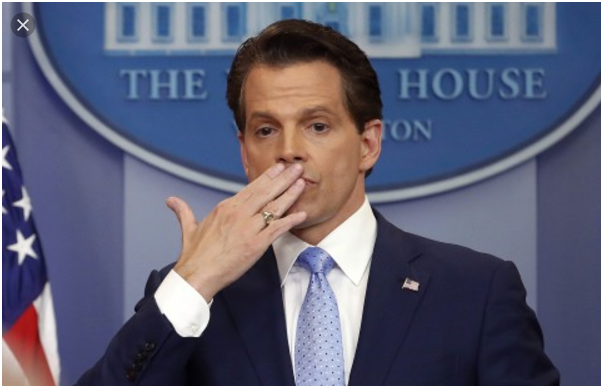 Sean Spicer is out. Sarah Huckabee Sanders has been promoted. And Anthony Scaramucci (aka The Mooch) is the new White House communications director.

Rather, he moves money around to other hedge funds for them to invest.

In 2009, when President Obama challenged Wall Street not to spend extravagantly, The Mooch flipped him the virtual bird by creating the largest party Las Vegas has ever seen.

Every year, Scaramucci hosts the SkyBridge Alternatives, or “SALT,” Conference in Las Vegas. Pressler described the “hedge-fund bacchanal” in 2012 as being “launched in 2009, in defiance of former President Barack Obama’s warning Wall Street to stay away from partying while the rest of the country suffered.”

Take Donald Trump seriously but not literally—or better yet, take him symbolically.

He was the subject of a retracted CNN story that Trump points to as evidence that the Russia story is “fake news.”

The Mooch has not always been on Trump’s side.

In 2012, he was a strong supporter of Hillary Clinton.

And he certainly thinks he’s above the law when it comes to sexist and misogynistic comments.

Yet, here we are.

Anthony Scaramucci’s appointment signals that Trump appears to value loyalty and a certain star power over actual credentials for a communications job.

That’s not to say Scaramucci can’t do the job as White House communications director, but his background as a hedge fund owner is not the typical career path for a top-level communications position in the White House or anywhere else.

The job of communications director should be to improve media relations.

The Mooch should be with Sanders in the briefing room every day to calm journalists, be transparent, to stop calling them “fake,” and to respond to opposing views.

A person with communications expertise would know how to do these things—and how to counsel his or her client to repair his reputation.

He or she would know the true client is the people of America, not the bully in the Oval Office.

But it’s more likely The Mooch will continue the media attack, support the lies Trump wants out there, and help to take focus away from the Russia investigations.

The Mooch is an Adoring Fan

And that’s because Trump hired The Mooch because he’s a notably successful self-promoter, a billionaire, and an author who keeps a high profile on social media.

Not because he has communications experience.

He hired The Mooch because he has zero problem saying how great Trump is, while defending his alternative facts.

This gives Trump great confidence in The Mooch’s ability to continue the fake news tirade.

Not because he has communications experience.

It’s become evident Trump likes to surround himself with the people who won’t tell him no—and The Mooch will continue that trend.

During his first press briefing on Friday, The Mooch proclaimed his love for Trump at least three times.

He showered the president with compliments, comparing him to a favorite coach, praising his election victory, hailing him as a hard worker, and denying there is anything to the Russia story.

He also blamed the White House woes on poor communication, not a burgeoning scandal.

On State of the Union on Sunday he repeatedly argued the White House needs to fix it’s public relations problem:

Listen, there’s obviously a communications problem. I just think we need to deliver the messaging a little bit differently than we have been doing it in the past.

But anyone with communications experience knows the problem isn’t a public relations one.

Trump wants someone in the briefing room who is smooth, confident, and fast-talking.

He wants someone who relishes the chance to spin.

While the communications director doesn’t typically fill that role (the press secretary does), The Mooch’s performance on Friday begs differently.

Add on top his Sunday morning news appearances, where it looked as though The Mooch was speaking to only one viewer (Trump), and we may see more of him at the lectern.

I’m reminded of the West Wing episode when Sam is still at the law firm.

The legal team is talking to their client about buying a reduced-rate ship.

Though it could cause problems for them in the future (and it does, two seasons later), they say:

We have PR firms for PR problems.

It seems Trump truly believes his problems are all that of communication failures.

So why not bring in someone who can “fix” all of that?

I can’t say this any better than The Atlantic posed it:

If he were right, Scaramucci might be exactly the trick he was looking for. But since these are not all marketing problems, Scaramucci is the right answer to the wrong question.

During Friday’s briefing, Scaramucci told reporters he sought a “de-escalation” of the tensions between the White House and the press, and as he stepped down, he blew a kiss to the assembled journalists.

How long will the lovefest last when it becomes clear to Trump and Scaramucci that messaging can’t fix everything?

Because, truly, PR cannot fix the PR problem when the problem is in leadership, not in communications.