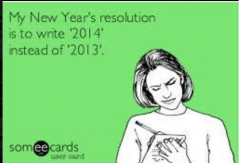 As I type this, it is 42 below zero in Chicago (with the wind chill; even though Rob Biesenbach doesn’t believe in wind chill – I do!) and I’m trying to figure out how I’m going to get my 20,000 steps today without going outside.

Which brings me to the topic of today’s blog post: Goals.

I took a look at my 2013 business and personal goals to see how I did.

Coach: I’d give myself a B+ in this. If I’m not overly tired or overwhelmed, I do very well in this regard. If I’m tired, though, ug.

Delegate: I’d say an A- in delegation last year. I’ve gotten much better at delegating and trusting people to do their jobs. It helps to have a cracker jack team!

From a personal perspective, my goals were to ride 5,000 miles and get away from my desk in the middle of the day to exercise.

Steps Program: You see, I read a study that shows, people who sit at their computers for more than eight hours a day, are more likely to have health problems than those who smoke a pack of cigarettes a day.

Because of that, we instituted a steps contest in May. We all have UP bands and we compete against one another for quarterly rewards.

I’m not allowed to compete (though I do track my steps against everyone else), but it does get me moving during the day.

Riding: You’re not going to believe how close I was to achieving this goal.

Not too shabby considering I had a broken foot for six weeks and a concussion in August.

Pending an injury free 2014 cycling season, I think I can crush that goal.

Which brings me to this brand, spanking new year.

My goals this year are: Focus, coach, and productivity.

Yes, two have remained the same, but I need continued work in both.

Focus: We have a pretty large financial goal this year – we plan to triple our 2013 business. That is going to require an immense amount of focus.

This means I will not allow myself to get riled up when someone posts something I disagree with on the social networks.

I will say no to the meetings that don’t help us get to our goals.

And everything I do will have meaning – from the book launch and speaking engagements to new business opportunities and a new Spin Sucks.

Coach: This year I have a team who have people they are leading. That means my coaching goes to a new level: Teach them how to lead.

This is the fun stuff and I’m really excited to focus in this area!

Productivity: I can do it this year! Twelve hours or less a day.

And now to the personal goals.

I’m kind of afraid to write that because now Laura will know what she’s up against and step up (literally) her game.

Methinks I may need to get a treadmill desk to stay ahead of her.

I also want to cook five nights a week and read two books every month.

(I’ve already read Bridge of Sighs this month and started on Once We Were Brothers.)

So there you have it. In writing so I’m held accountable.

What are your goals for the year?