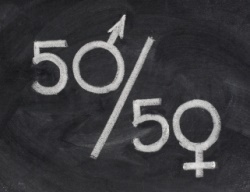 Without even clicking on the link, I knew “A Rant About Women” was going to make me mad.

I read half of the post before I got really angry. Then, in disgust, I closed it and didn’t go back to it.

But it kept nagging at me. So I gave it a second shot. And then a third and fourth. And then I read some of the 511 comments.

And, in typical Gini fashion, I won’t be able to let it go until I write about it.

A Rant About Women

The premise of Shirky’s blog post is that women are not self-promotional, which holds us back. He quotes a magazine editor who tells a friend of his that men promote themselves all the time, but women wait for people to take notice.

I suppose that’s true. I know I’m guilty of it…having been raised to believe that if you work hard, eventually people will notice.

He goes on to say that, in order for us to be treated equally, we must be forceful and self-confident. He says:

It’s tempting to imagine that women could be forceful and self-confident without being arrogant or jerky, but that’s a false hope, because it’s other people who get to decide when they think you’re a jerk, and trying to stay under that threshold means giving those people veto power over your actions.

And therein lies the problem. When we act like men, we’re seen as as the word that begins with a B…you know, another name for a female dog.

But even if we acted like men, had the self-confidence to be called mean names, and were forceful and self-promotional, there still is a glass ceiling.

I’ve written about how I had to create a fake personality for Charles Arment, my “business partner,” who doesn’t exist, in oder to do business in the early stages of Arment Dietrich.

Charles was a great partner. He gave me negotiation power. Prospects took me seriously. And he didn’t exist.

I’ve always figured if you can’t fight the battle, join them…and then have the last laugh. I beat the glass ceiling with my own Remington Steele.

Why Can’t We Just Be Women?

One of the commenters, Laurence, said:

I just say that the male assertiveness/self-belief that Clay espouses has been running the planet for the last five (or so) milllenia, and look what a f* up job we have done. And we want women to learn how to behave like us? Pleeeease.

Each gender has strengths and each has weaknesses. Why not let us just be women, without trying to be men, and let each gender enhance the others’ strengths? I’m willing to admit men are better at some things…just like we’re better at others.