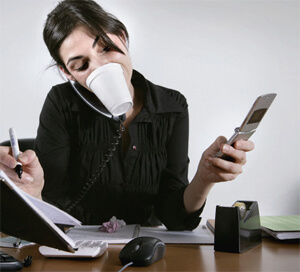 Hi, my name is Liz and I am a persistent multitasker.

I can hear all you fellow multitaskers droning, “Hi, Liz.”

They say the first step to changing is admitting you have a problem. That’s the issue, though, is multitasking a problem?

I’ve always been proud of my “ability” to multitask, do I really need to change?

So, I started a quest to determine whether or not multitasking is the nefarious culprit keeping me from greater accomplishment.

I began my research online – more than 19 million hits on Google – and found the majority of articles and research are solidly against multitasking.

One noted researcher, Clifford Nass, professor at Stanford University, has extensively studied multitasking.  He concluded, “It turns out multitaskers are terrible at every aspect of multitasking.”

However, I did find one opposing view. Monica Smith, is a professor of anthropology at UCLA and in her book, “A Prehistory of Ordinary People,” she makes the argument that humans have been multitasking since prehistoric times, mostly out of necessity.  Smith contends, “Multitasking is what makes us human.”  But, just because we CAN multitask, SHOULD we?

If I’m being honest, my own experiences are a testament against multitasking. I can’t count how many times I have burned my hand while cooking while trying to focus on something else, usually helping with homework. And although I’ve never walked into a fountain while texting, I know I am significantly more productive when I am focused on one task or project at a time.

This is probably true for most people.  Eliminating distractions makes a tremendous difference in our ability to focus.  Even if multitasking is hard-wired into us, we should be mindful of how and when we are using it.

I was sure I would find a similar amount of research slamming multitasking as a creativity killer.  I was surprised.  It seems, when it comes to creativity, there may be some benefits in multitasking.

In a very interesting Newsweek article, The Creativity Crisis, authors Po Bronson and Ashley Merryman discuss declining creativity in the U.S. and its causes. Not surprisingly, an overuse of technology and media are considered creativity killers, and certainly are common multitasking tools.

However, it is noted, “Creativity requires constant shifting, blender pulses of both divergent and convergent thinking, to combine new information with old and forgotten ideas. Highly creative people are very good at marshaling their brains into bilateral mode, and the more creative they are, the more they dual-activate.”

Again, I looked at my own experience and observations and found there may be some truth to the benefits of multitasking for creativity.  I often turn to sketching (really doodling) when trying to concentrate. And there have been many times I’ve had bursts of creativity while doing mundane tasks. I’ve also noticed similar results from my kids.

Although my research in this area is mostly anecdotal, when it comes to multitasking and civility there really is no grey area. Multitasking when dealing with others is just plain rude. How often have we experienced the pang of disappointment when someone we are talking to divides their time between us and a computer screen or smartphone or what have you?

It’s downright annoying to go through a checkout line while the cashier is chatting with someone else, or worse is on the phone! This has become a prevalent societal problem. Look around any restaurant and count how many people are looking at a phone or device instead of the people they’re with. We are teaching our kids, and ourselves that it’s acceptable to check out when a distraction comes along.

I’m guilty of this, too. I’ve typed emails while on the phone and had more “bad mommy” moments than I’d like to admit. Times when I’ve put off my girls to deal with an “oh, so important” call or email. I did recently own up to this bad habit and have given my kids permission to put me in a “work timeout” when I’m caught multitasking during my time with them.

Well I’m convinced – multitasking is a problem for me. Step one complete. The next step? Making a change…!

What about you? Are you mired in multitasking? Perhaps you’re a master juggler? I would love to hear your thoughts.

Liz Reusswig is the owner of EMR Strategies, a small business consulting firm, and is the founder/owner of Kids Theatre News, an informational website for the theatre community. She loves helping people discover the power of social media and online engagement. Liz lives in Pennsylvania with her hydrogeologist husband, their two theatre kids, and loyal dog, Coco.

View all posts by Liz Reusswig