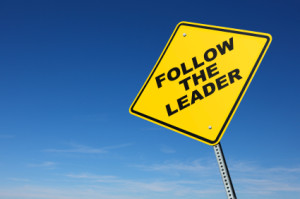 Last week I wrote about humility in leadership.

And, as usual, I had some really interesting conversations with you lot.

Before I move on, let me just say this: The Spin Sucks community ROCKS!

Ok, back to the conversations.

One chat I had in particular, about team leadership training, really stuck with me.

James left an impressive comment. A veritable blog post in itself. He spoke eloquently about how leaders are usually not born, but created. Taught. Coached. But this comment of his really stood out for me:

Leadership is so important to the military formal classes the subject begins in basic training. The higher the rank the more intricate the courses become. A prerequisite to certain superior rankings requires formal extended leadership training in an academic environment.

That got me thinking. Why don’t more leaders groom and coach the up-and-comers? How come team leadership training doesn’t start during that first “Would you like sugar with that?” job we all had at one time or another? Why isn’t leadership training a by-the-book prerequisite to moving up in your civilian career?

Warren Bennis became a leader as a 19-year-old army recruit (again with the military!) in World War II. He went on to write a library full of books on leadership and change, and when I stumbled on an old interview with him, I might have also stumbled on the answers to my aforementioned questions.

The best leaders are educators, and they really do enjoy bringing on people who can outperform them. It takes security and self-confidence and self-esteem to do that well. I’ve known people who kept down brilliant people because they felt they would be upstaged. But most leaders are proudest of a bench of terrific people behind them. This is something organizations don’t do enough of. I don’t know any that has a roster of terrific mentors and rewards them.

Granted, the interview’s about 10 years old. Maybe things have changed. Either way, I hope today’s business leaders aren’t so fearful of one-upmanship they keep good people down, or fail to provide them with the team leadership training they need to become great leaders one day themselves.

With that in mind, SmartBlog recently published “A CEOs Guide to Leadership Development.” Out of the 10 tips, here are a few that really resonated.

Know how executives really develop. In other words, take yourself back to when you were just starting out. What were the things inspired you? What opportunities did you have to learn and grow? Toss the courses and books out the window, and allow your employees to learn through experience. Assign new and challenging job responsibilities, or partner them with a senior staffer and encourage mentoring.

Spend time assessing talent. Yes, you’re busy. You have people! But an engaged CEO is one who believes leadership development can’t be isolated. Get to know your junior staffers. Do periodic audits of the best work being done in your organization – and include everyone’s work – from the kid in their first job to your top executives. Set aside some time each month for some casual face-to-face time with the junior team members who really impressed you.

Hold others accountable for assessing and developing future leaders. We’ve all been at ‘that’ company. The company that talks the talk, but doesn’t walk the walk. Oh, they do yearly personal reviews, talk about where you could improve or want to grow, promote personal development days, pat themselves on the back about the new learning initiatives starting soon, and a year later nothing has changed nor been implemented.

As the CEO you need take the time to set the goals, red flag them, and then hold people accountable for their implementation. Publicly if need be. If your executive teams know you’re personally involved and expect results, they’re less likely to drop the ball.

I understand. You’re busy. But many of these points are simple changes in thinking, or might only require an extra half hour a month carved out of your schedule. Also, think about the return to your organization: Your reputation develops as a ‘go to’ company full of opportunity, and your staff grow into valuable leaders in their own right, who pass their knowledge down to the next round of new hires!

Because don’t forget, “A leader is not paid for what he does – rather for what he can get others to do, ” says J.D. Robertson.

I would love to know your experiences. Does your company actively seek out and nurture junior people for leadership growth?