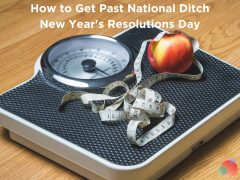 Well, here we are. Midway through the month. And tomorrow is officially National Ditch New Year’s Resolutions Day.

We can joke about it because we all start off with the best intentions and then life takes a hold of us and shakes us uncontrollably.

Suddenly it’s not quite three weeks into the new us and we’ve already given up.

But what if we made a pact to not do that this year?

And then, because you make it another 17 days, you could commit to one more 17 day stretch.

That puts you at 51 days, which is a little more than seven weeks.

And we all know it takes only six weeks to create a habit.

Although, there has been some debate that it takes three weeks to 66 days. I prefer to go the six week route, which is when I personally start to see results from my new habit.

Either way, you’re well on your way to success with 51 days—that’s only two more 17 day stretches.

Let’s do this thing!

Don’t Be Too Hard On Yourself

So how do you keep chipping away at your New Year’s resolutions?

The first thing to remember is if you have a bad day, it’s OK!

Just don’t let that bad day stretch into two or three or four bad days in a row.

I’ll give you a great example.

Most of you know I ride my bicycle competitively. I’m, let’s just say, a bit crazy about getting in my workouts.

I’m highly, highly motivated and rarely does a day go by (that I’m supposed to ride) that I skip.

I skip only if I’m too sick to get out of bed or if I have an all-day meeting that can’t be avoided.

I’m so crazy about riding my bike that I hate to take rest days. But I’ve also learned in the past two years that rest days are where the real results come in.

Sure, it’s fun to ride your bike every, single day, but it’s very, very bad for you.

My coach has forced me to take two rest days every week. And, because of the way my weeks are structured, I almost always end up with two rest days at the same time (Sundays and Mondays).

Do you know how hard it is to go back to riding my bike on Tuesdays?

I’m working on restructuring things so I don’t have two days in between. It’s that hard.

Which is why I say, be kind to yourself if you have a day that you miss whatever your goal is. But work really hard not to let it become two days or more.

(Unless you have the flu and are ultimately dying. Then I forgive you.)

So if you skip a workout two days in a row, it’s much easier to skip it on the third day.

Break Your Goals Into Smaller Chunks

The second thing that will help you keep chipping away at your New Year’s resolutions is to break down your goals into smaller chunks.

Nearly 20 years ago, I became a vegetarian (it’s crazy to think it’s been that long!).

But I didn’t go full-force into being a vegetarian.

I would have failed.

Instead, I gave up red meat first. And I let my body get used to that.

Then I gave up seafood and fish and I cried every time someone ate sushi in front of me because I missed it so much.

Then I gave up poultry and pork.

It took a few years to become a total vegetarian.

Part of the reason we fail at our New Year’s resolutions is because we try for too much all at once.

Your body or your brain or your family will revolt. Don’t make it so hard on yourself!

Then, “I’m going to lose another eight pounds in February.”

When you do that, you make it significantly easier on yourself because the goals are smaller—and because you will have setbacks.

But those setbacks won’t make you fail. They’ll just be a small bump in the road.

And, if you focus on eight pounds every month, guess what happens?

NINETY-SIX POUNDS LOST IN A YEAR!

Apply This to Work

This works for professional objectives, too.

Because you won’t add clients in January and February and then you’ll have only 10 months to find a quarter of a million bucks.

Instead you break that down into smaller chunks.

One thing to note: I’m a big believer in charging for value, not time, and no client on earth will get your level of expertise if they hired you full-time for only $30,000 a year—or $2,500 a month.

You could also push yourself to get six clients at $10,000—or one every, other month.

That way, you have reached your goals and you’re providing far better service.

The point is, you don’t have to ditch your New Year’s resolutions!

You can see I’ve broken down your habit-forming into smaller chunks.

By February 3, you’ll have only one more 17 day stretch—and by February 20, you will have gotten over the “I failed at a New Year’s resolution AGAIN” hump.

Report back. I can’t wait to hear!