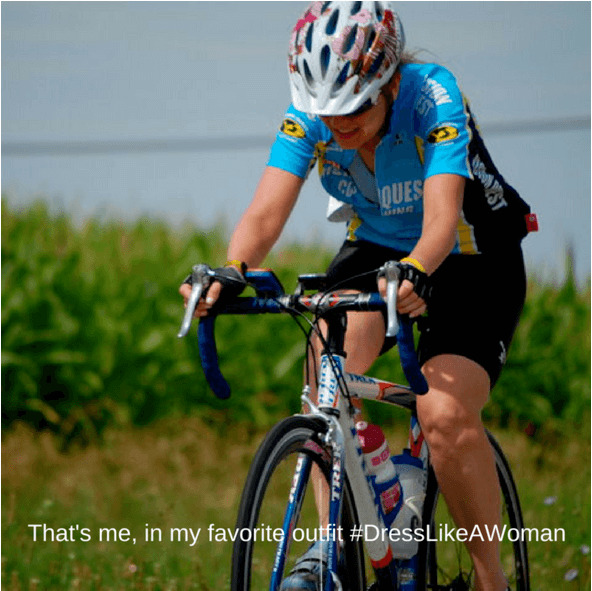 In two weeks and two days, I embark on a four day, 400 mile bike ride across Wisconsin.

To say it’s occupying every spare thought in my brain is putting it mildly.

In preparation, last week alone, I rode 15 hours and 11 minutes.

This means I spend A LOT (a lot) of time in my cycling clothes.

Even when I’m presenting The Content Secret to Closing More Clients bootcamp, only the top of me is professionally dressed.

Well, see the photo above.

It’s one advantage to working from home!

That’s why, when I saw #DressLikeAWoman after he who shall not be named said women should dress like women, I got all riled up.

One would think, in 2017, we wouldn’t be talking about women’s professional appearances.

Not every woman works in an office.

And even those who do are often freezing cold from the thermostat set at a level that keeps only the suited man in the corner office at a comfortable temperature.

Further, some of us live in dresses while others have a closet full of pants.

We all have different personal style…and that’s a good thing!

Women around the globe are being sent home from work for not dressing in a feminine enough manner on the one hand.

Or being told they can’t wear a headscarf.

At the same time, they’re also being criticized by men who claim to be distracted by their feminine attire.

Or other women who feel they are using their looks to get ahead.

We expect women to be fashionable, yet we criticize business women for being too interested in fashion.

As a woman, if you dress attractively, and a colleague or a client sexually harasses you, you’re often told you should be flattered.

Or you’re told it was your fault for not dressing more conservatively.

If you adopt a more masculine or gender-neutral appearance, you’re often told you come across as being intimidating or aggressive.

Then you’re encouraged to dress and behave more femininely.

Whichever choice you make is potentially the wrong one.

Not to mention the recent research about the detrimental health effects wearing high heels have on women in the workplace.

(Plus, Tieks are the most comfortable and stylish flats around, so why would you wear heels?)

Note that, although the article about Trump’s workplace dress code says that male staffers are also held to high standards, that doesn’t seem to be true across the board.

There’s an easy way to stop this debate once and for all: #DressLikeAWoman and ditch the gender-specific dress codes.

Instead of having a subjective laundry-list of all the things that are inappropriate to wear in your office, start with the assumption that you’ve hired smart, professional people.

Next, be honest about the work environment.

Are all of your employees public-facing?

If many are working behind-the-scenes, consider having a dress code that reflects that.

Requiring a sales rep, a customer success manager, and an IT technician to adhere to the same dress code doesn’t always make sense.

Instead of having a rigid dress code, consider having a more general policy that is based upon the job the person is doing and its location, not the gender of the employee.

A colleague was drafted to help with her firm’s annual client conference.

She was assigned a role on the trade show floor, providing clients with social media coaching and assistance.

She was also told she had to wear the event button-up shirt with a pair of khaki chinos.

Note that her employer didn’t supply the khakis.

They just assumed everyone had a pair.

My colleague has a closet full of dresses and skirts, almost all with some black in them.

The last thing she’d ever purchase is a pair of khaki trousers.

Yet she was told that she had to do so, no exceptions allowed.

She bought the pants for the event, and donated them to Goodwill afterwards.

But this tussle over her clothes left a long-term negative impression.

What’s funny here is, in a very basic way, the company was trying to have a gender-neutral dress code.

Is it the Policy…or You?

But, if you are going to force employees to adhere to a rigid dress code for an event, you need to reimburse them for the clothing they have to go out and purchase for that event.

The better solution, however, is to come up with a piece of clothing you have all of your employees wear at the event that can be easily added as part of an outfit they already own.

If your workplace is casual, that could be a hoodie or a fleece vest.

Or more formal, you could supply company-branded sweaters.

If you are spending too much time worrying about and policing your company’s dress code, it’s time to step back and ask yourself why.

What is the real issue in your workplace that’s not being addressed?

Chances are, there’s something a lot more important going on than what women are wearing.

A version of this first appeared in the Huffington Post