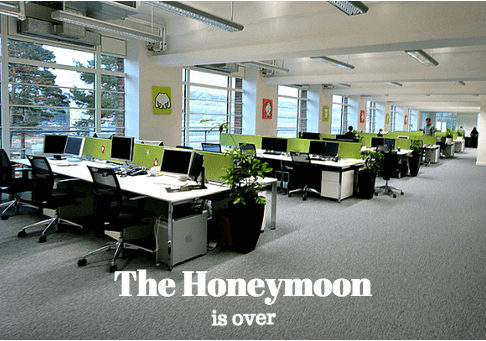 The cubicle is the notorious symbol of office environment oppression: A cage of carpeted gray walls that suck the life out of any Dilbert comic or family vacation photo that you pin to it.

Anything that’s a symbol of pride for you such as a plaque or a trophy that you bring in to have at your desk now translates to “Congratulations, you made it here, to a carpet box. This would be great if you were a cat.”

Cubicles were originally designed to give office workers more freedom of movement, but soon enough they turned into instruments of evil when office managers began arranging them to fit more bodies.

However, it turns out, open offices may be even more diabolically designed.

Open to Having Personal Space Invaded

According to Jeffrey Tompkins, a Boston-based architect and interior designer, the standard allotment for workers per square foot has gone from 250 per square foot 25 years ago to between 160 and 190 presently.

So, while one of the supposed advantages of the open office is to make employees feel less boxed in, it’s actually giving them less personal space than they had before.

Now, I can’t confirm this, but I’m pretty sure the “open” of open office is secretly short for “open to having your personal space invaded.”

The ability to communicate freely is definitely a nice advantage of the open office.

Where your superiors used to feel like lurking vampires, they’re now less able to sneak up on you.

Where your co-workers used to be hard to talk to, it now feels like everyone is on the bridge of the Enterprise, collaborating together to steer this ship home.

(Raise your hand if you didn’t play Star Trek in your parents’ garage growing up. Now get out.)

Unfortunately, it’s time to admit that the Open Office Layout Honeymoon is over.

From the sounds of it, it’s been over for a while, but maybe we’ve been too afraid to admit it and risk hurting open office’s feelings.

Here are a few reasons it’s over.

A chart compiled by the Harvard Business Review featuring information from a University of Sydney study reveals the two biggest sources of dissatisfaction for open office workers are sound privacy and visual privacy.

That open line of communication that you now have with your coworkers and managers applies to noises of all kinds, unfortunately.

You’ll have a coworker  who clicks pens or raps their fingernails on the desk and the one with crappy headphones that project a tinny beat over impossible distances.

Plenty of other things besides noise can travel freely through the open office air.

For example, a Nerf dart, wad of paper, or a football that your former QB co-worker claims can throw with a perfect spiral.

My feeling is that success in an open office environment hinges on an individual’s amount of narcissism (there’s probably a kinder way to phrase that, but what do they care, they’re narcissists).

You have to be able to turn the noises and distractions into white noise.

If you’re able to worry solely about yourself and your own productivity, you’ll be fine.

However, if you’re the type who constantly or even seldomly compares your own progress to that of those around you, an open office is kryptonite.

Everyone else will be typing faster than you, clicking their mouse more often than you, cracking better jokes than you, and furrowing their brows more convincingly than you.

Either have an absolutely bulletproof immune system or kiss that record goodbye if you’re going to work in an open office.

According to a study done in Denmark, open office environments lead to 62 percent more sick days than single-person offices.

You’ll come to resent the co-worker who brought the illness into work originally and refer to them under your breath as “Patient Zero.”

Along with the distraction, another byproduct of an open office’s noise pollution is an increase in stress.

This stress has detrimental effects on your immune system, making you an even more vulnerable target to “Patient Zero.”

In a study cited by The New Yorker, Cornell University psychologists found that open office workers who were exposed to regular work day noise for three hours had increased levels of epinephrine, the hormone that triggers the fight-or-flight response.

This increased level of stimulation can make workers anxious and harm their ability to be productive.

Sitting at a desk all day is already proven to contribute to the risks of diabetes and cardiovascular disease.

Ignoring your body’s need to adjust makes sitting all day even worse.

According to Washington State University, 63 percent of employees are classified as disengaged, so companies want to do anything they can to make their employees feel engaged.

However, throwing them in the open office pit is beyond the point of diminishing returns.

As terrible as the walls of a cubicle are, that barrier offers the employee some semblance of control over their work environment.

In an open office, the only way to attempt to achieve privacy is to hide under the table.

For some reason, that has the opposite effect and people pay even more attention to you because you’re under the table.

Alternately, you can reserve the conference room for “a little ‘me’ time,” but that, too, will get you some strange looks.

When an employee feels as though they have control over their work environment, their job satisfaction and productivity increases.

Most of us can list at least three or four things we wouldn’t feel comfortable doing in front of a large group of people but would do in a more closed environment. That level of comfort is critical for workplaces to harness, but something we lose when we open up the office.

The open office is full of constant stimulation and the feeling of having no control over this can make an employee feel helpless.

They have no control over the look and feel of the office and there’s no volume dial on office chatter.

This feeling of helplessness is absolutely detrimental to motivation and productivity.

The End of the Open Office Honeymoon

Cubicles are heinous and stuffy, but your body and mind actually prefer them to the open office.

The dilemma lies in trying to satisfy the social desire to be a part of a team and make personal connections with your fellow employees, the psychological need of feeling in control, and the biological need to not get sick a lot.

These walls will be transparent, soundproof glass.

By merely flipping a switch, an employee can choose between collaboration and privacy.

Somehow the walls will come equipped with technology that will be able to measure how contagious your sick co-workers are and put up the walls as need be (dream with me, won’t you?).

Also, the glass will allow you to toggle its opacity so you can shun the visual distractions.

Comment below if you’ve found a solution to these open office woes, or if you’d like to invest in my Retractable Cubicle Wall invention.