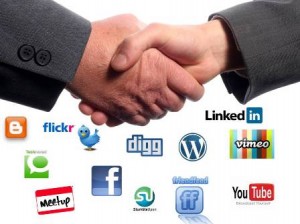 Before the Coopr event on Thursday night (where I spoke in Amsterdam), I was talking to a local journalist about social media and its role among an executive team.

He asked me, “How important is it for the leader to be involved in using social media if they want their organization to use it?”

I said it’s extremely important and emphasized the value in leading by example.

Take, for instance, Richard Branson or Mark Cuban. They both run very successful organizations (both of them run more than one) and they both are active on the social networks. They don’t have someone tweeting for them, for instance, they do it themselves.

And, even though they are the chiefs of multi-billion dollar companies, they find the time to connect and engage with their fans, followers, and connections.

Right after that conversation, Howie Goldfarb and I had a similar exchange. He said it’s a shame organizations outsource all of their social media because when the relationship ends (and it always ends), the intimate knowledge of the people you connect with go away.

Sure, the fans, followers, viewers, listeners, and connections remain with the organization, but knowing that Sally stops by your restaurant as a special reward when she reaches her weekly weight goal or Ben has bought and donated several thousand bottles of your product to schools in Africa…that knowledge is gone.

You see, social media is just that – social – you are supposed to build relationships with real people out there on the interwebz. Yet most organizations, particularly business leaders, treat it as another way to broadcast about how great they are and ask people to buy.

Sure, you can outsource your social media and most of you should. But if you want intimate knowledge of some of your biggest customers? Those relationships should belong to you.

Just like anything else, if you lead social by announcement (write a memo, say it will be done, and expect everyone else to do it), it won’t work.

The culture has to change in order to embrace the new way of building those relationships, understanding the nuances of your most enthusiastic fans, and actually making money from the effort you spend online.

Just like you would with any other culture change, there are four things to consider:

It’s not easy. We expect to be able to hand off social media and be done with it. But if you want it to work, and if you want to make money from it, you have to be involved.