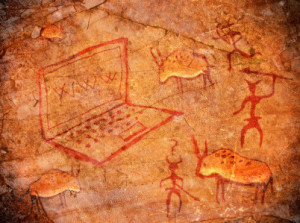 When Lindsay Bell asked me to guest blog, I was pumped.

I asked her “What topic?” She said, “Anything. Write it from the heart.”

I was initially stumped for a personally passionate fit for a PR and marketing blog.

But there is something.

My psychological well-being has become a priority in the last few months.

The online business and our digital world has a tendency to throw things out of balance. I’ve gone primal as a health initiative to address the psychological challenges of the cascade of technology in the social media world.

And yes I’m talking about adopting some of the traits that kept our cave ancestors (Grok) alive and well! I realize modern society’s conveniences and innovation has lessened the physical burden on folks.

So how does one go primal in today’s world?

For me it means intentionally avoiding some “socializing” online,  so I can nurture my psychological well being with movement and exertion supplemented with a robust primal (Paleo) diet. When I take that time away from media, I find myself less antsy and more focused.  I move more frequently and make my physical fitness a priority.

I chow down protein four to five times a day. With this new balance of attention, I’ve seen spikes in my creativity and energy. Maybe the practice is self-indulgent, but I think such habits promote good health and work productivity. I believe banter, organic conversation, and social media are stimulating, and I thrive on them. But since I’ve struck my “primal” balance, I find myself more alert with stimulating psychological vitality.

Mind and body should be in sync. If your body is immobile, your mind probably misses out on some extra exercise. Our ancestors survived on the move, hunting for meat and gathering plants, fruits, indigenous nuts, and seeds. When we take in more protein, we are able to consistently burn fat for energy. Take in more carbs, and you spike your insulin and end up feeling sluggish or randomly crashing during the day.

In the time of the caveman, physical movement was common throughout the day at low levels – but at times physical exertion was high intensity (chasing animals, lifting, etc) and they soaked up vital Vitamin D from the outdoor activity, only sleeping when necessary.

Tough to do these Grok practices if we need to be at the computer. I wonder if it was our primal instinct that lead to the creation of tablets and smartphones? Maybe it’s because people NEED to be mobile. Heck, maybe even the Vine app feeds that desire subconsciously.

My point – humans are instinctively mobile.

I believe, for the sake of well-being, we should gratify ourselves with some Grok practices. I’m reading Red Thread Thinking – Weaving Together Connections for Brilliant Ideas & Profitable Innovation, and it points out killer research that aligns with going primal. The book cites studies that state REM sleep, and lingering in your bed in a half-awake state, connects bits of information for our brains to process.

Exercise has also proven to result in a mad elevation of cognitive performance. RTT also points to a study, published in the Creativity Research Journal, by Blanchette and Ramocki. It examined creativity immediately following moderate aerobic exercise and again two hours later. Result? There was a creativity surge in the participants. The two hour lag time did not decrease the creative levels either.

When I was younger and in college, I highly valued sleeping in. So much so, I never took a class that started earlier than 9:30 a.m. But even with an abnormal intake of carbs (elbow nudge), and an unstable diet and irregular physical activity affecting my morning energy, I managed to fly through.

But…when I started working from home after college and had more freedom, this became a real issue. I would get tired sporadically throughout the day or have a harder time waking up. I didn’t expect to get so intimate with my Mac and I thought whole grain cereal would give me lasting energy. I only ‘worked out’ with my own body weight and my computer by my side. Productivity was unpredictable.

When I started going Grok-ish, things changed. Now I am working/writing in a more energized and alert manner. I still like to write my ideas at night but I wake up earlier with less struggle to develop them further. I do 15 minute high intensity workouts at different locations or go for a walk when my heart and mind prompts me.

We can mimic our ancestor’s behaviors in the context of our digital world and become more creative, alert, and productive. I recently bought a mini iPad partly to improve mobility. I’m happy to say I’m on much better terms with myself – and my Mac.

What do you think? Do you incorporate regular, daily exercise into your routines? Have you tried going Paleo? Notice any changes in brainpower?

A fitness-fueled freelance digital marketer, Anne Reuss wants to help you supercharge your life and business through fitness. Her engine runs on peanut butter burgers and pull-ups. Being Deaf has given her superhuman listening powers & a love affair of obstacles - so get your mind and body engines ready and stop waiting for happiness and success to fall into your lap with her upcoming blog Lift Live Lead!

View all posts by Anne Reuss