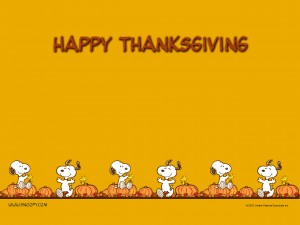 It’s the day before Thanksgiving and, as I sat here last night trying to decide what to blog about, I though it’d be fun to ask my team what they’re thankful for this year.

The only rule? They couldn’t be thankful they have a job or for their families or all the stuff people always say.

We know you’re thankful for that stuff. And you’d BETTER be thankful you’re working with me.

I asked them to have fun with it and to be creative.

So here is what some of them have to say.

Molli Megasko and I have worked together for nearly  six years. She was an intern, fresh out of college, and she was hired full-time because we liked having her around so much. Turns out she’s become really good at her job, too.

She is thankful she gets to work from home in New York City. She gets the work culture of a boutique agency and the social life of a Sex and the City girl. She’s also thankful her sister is having a baby, which gets her mother off her case for a little while.

Crister DelaCruz has been working with us since May and she brings a sense of style we all try to mimic.

She is thankful for perspective. She said:

Things haven’t come as easily to me in the last few years as they did during the first decade of my career. It has taught me to appreciate every accomplishment, kind gesture, and trustworthy colleague even more. The lessons I’ve learned have been invaluable.

She’s also thankful for sunscreen, the healthy lifestyle in which she was raised, and her parents’ genetics. Why? Because she turned 40 this year. And I’m here to tell you, she looks 25. I’d be thankful for that, too.

Lisa Gerber most of you already know because she hangs out on Spin Sucks all the time. She joined us in January and I’m pretty sure if she and I went on the Newlywed Game, we’d totally win.

She is thankful for the “unfriend” button, which she used with joy earlier this week (I have to go see if I’m still friends with her). She’s thankful for connectivity, Skype chat (where you’ll find the two of us all day, every day), FaceTime, and Dropbox. She is grateful she gets to do something she loves every day.

She’s thankful for Friday nights and turning off her alarm when she goes to bed. That’s because she thinks she has to compete with me on who can get up the earliest. Trust me, she isn’t going to win that one. But she can certainly stay out past 9 p.m.

I’m thankful I have such a strong relationship with both of my parents. I seem to have gotten the best of both of them and I’m grateful for everything they continue to teach me.

I’m thankful for Mr. D, who makes me laugh multiple times a day, even when he’s telling the same joke I’ve heard 20,000 times.

I’m thankful for Jack Bauer, who is an old man in a dog’s body, and who loves me more than he loves anyone else.

I’m thankful for my work husband (Patti Knight) who takes better care of me than I take of myself.

And I’m thankful for this blog and social media, which has brought me all of you. When people ask how we’ve built such a strong community, I always respond with, “You mean, the crazies?” And I mean it. You’re all crazy and I love each and every one of you for it.

I love my crazies! Happy Thanksgiving everyone!