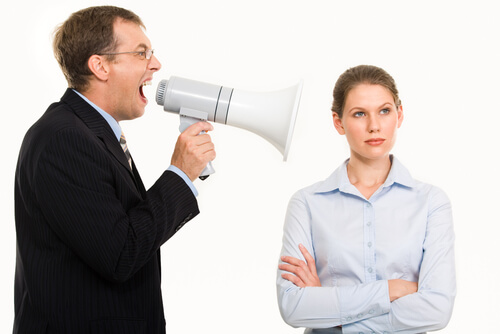 We had a client who is completely disrespectful to women and refuses to listen to anything they say.

Early on in our relationship, I was the only woman he respected. I would sit in executive team meetings and watch him listen intently to the men on his team, nod thoughtfully, and respond with intent.

But when a woman spoke, he would interrupt them, talk over them, and discount their comments and opinions.

It got to the point that, in just a few short months, women would stop even speaking in those meetings. I guess they figured why even bother?

It was maddening to watch so, when the time was right, I spoke with him about it.

I approached it from a communications and leadership point-of-view so he wouldn’t get defensive.

And Then It All Fell Apart

You could tell, in subsequent meetings, he was trying really hard.

When he would start to interrupt a woman—one he promoted to his leadership team, by-the-way, I would give him a sideways glance and he stopped.

(You know the glance. It’s the same one your mom gave you when you were a kid. My mom has it perfected. She never had to say anything. She just had to give us that look.)

He worked diligently on it until the start of this year when he had a major personal set-back and returned to his ways.

And suddenly I was on his bad list, too.

He stopped taking my calls, refused to sit in any meetings with me, and wouldn’t answer my emails. He told his assistant not to schedule any calls with me and spoke to me only through other people.

He was so mad at me, at one point (because I had dared to disagree with him), that he sent a male colleague to speak to me about it, instead of calling me himself.

When I called him to apologize, he sent me to voicemail and never acknowledged my call.

We ended up resigning the business because of it, but I think of them often and wonder how they’re doing.

Of course, for someone like me (double type A, as my dad calls me), it’s hard not to be in there working to help them change.

But, clearly, there was nothing I could do.

I was reminded of them earlier this week when I read a series of articles about leaders who listen and how they are able to achieve more by doing so.

And, as I do, I thought, “The advice I gave him when he did start to listen might make a valuable blog post.”

Here is what we worked on:

And now the floor is yours. What has your experience been either with leaders who won’t listen or those who do? What else would you add to this list?