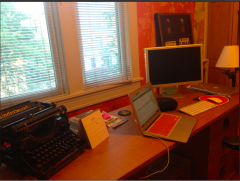 On Sunday afternoon, I sat down to chat – via Skype video – with Dan Cristo, the co-founder of Triberr.

He’s speaking at SES Chicago this week on the topic of blogging and, rather than go into a room full of people and extol his wisdom on the topic, he has collected soundbites from bloggers that he’ll show during his presentation. (A very cool idea if it’s executed well.)

One of the questions he asked me is how my time with blogging and social media has changed throughout the years. He said the perception is I spend pretty much all of my time doing both and he wonders how I have time to do anything else.

I’m pretty sure I laughed out loud at that, which probably makes my soundbite unusable.

In July, we decided to test content and see if I could scale back the time I spend writing here, focusing on larger topics and more in-depth articles.

Of course, the latter hasn’t happened yet as I just submitted the final chapter of Spin Sucks on Friday, but we’re on month five of my writing only three blog posts a week (I don’t count #FollowFriday and Gin and Topics in there because they practically write themselves).

As it turns out, you don’t need to read me every, single day. Which is both enlightening and a little bit sad.

But, if I set my ego aside, I realize the content I’m creating now is better and more focused because I’m not under immense pressure to deliver something brilliant every, single day.

As well, my habits on social have changed.

I used to be a little (okay, a lot) obsessive compulsive about building my networks, engaging with new people, finding people with whom to have conversations, and reading – and commenting on – content across the web.

The process I went through in the beginning was both time intensive and rewarding. I built relationships with people who, even if days or weeks or months go by in between conversations, we can pick up right where we left off.

Those kinds of relationships wouldn’t be there had I not spent the time I did when I began using the social tools.

How I Spend My Days

But to go back to Dan’s original question and put some reality into the perception, this is how I spend my days.

(I copied this visual from Rand Fishkin because I really love how he laid out his day. You can click on it and it’ll appear larger.)

Of course, there are some days (like Fridays) I don’t get up as early as 5 a.m. and, if I spend my weekends getting blog posts for the week ready, I can spend my 5:00-6:30 a.m. time writing other things (like the book or testing in-depth articles).

But social media takes only 45 minutes to an hour of the total green blocks you see. Most of that time is spent creating content and finding – and commenting on and sharing – other content.

So the perception might be I spend all of my time writing and on social media, but the reality is far from that.

I simply use SocialOomph to schedule my posts throughout the day so you aren’t deluged with content really early in the mornings and right at the end of the day.

And that’s it. It’s not overly complicated by design.

Are there newer tools that could make my life even easier? Probably. But this works for me and it’s a habit I’ve already created, so I go with it.