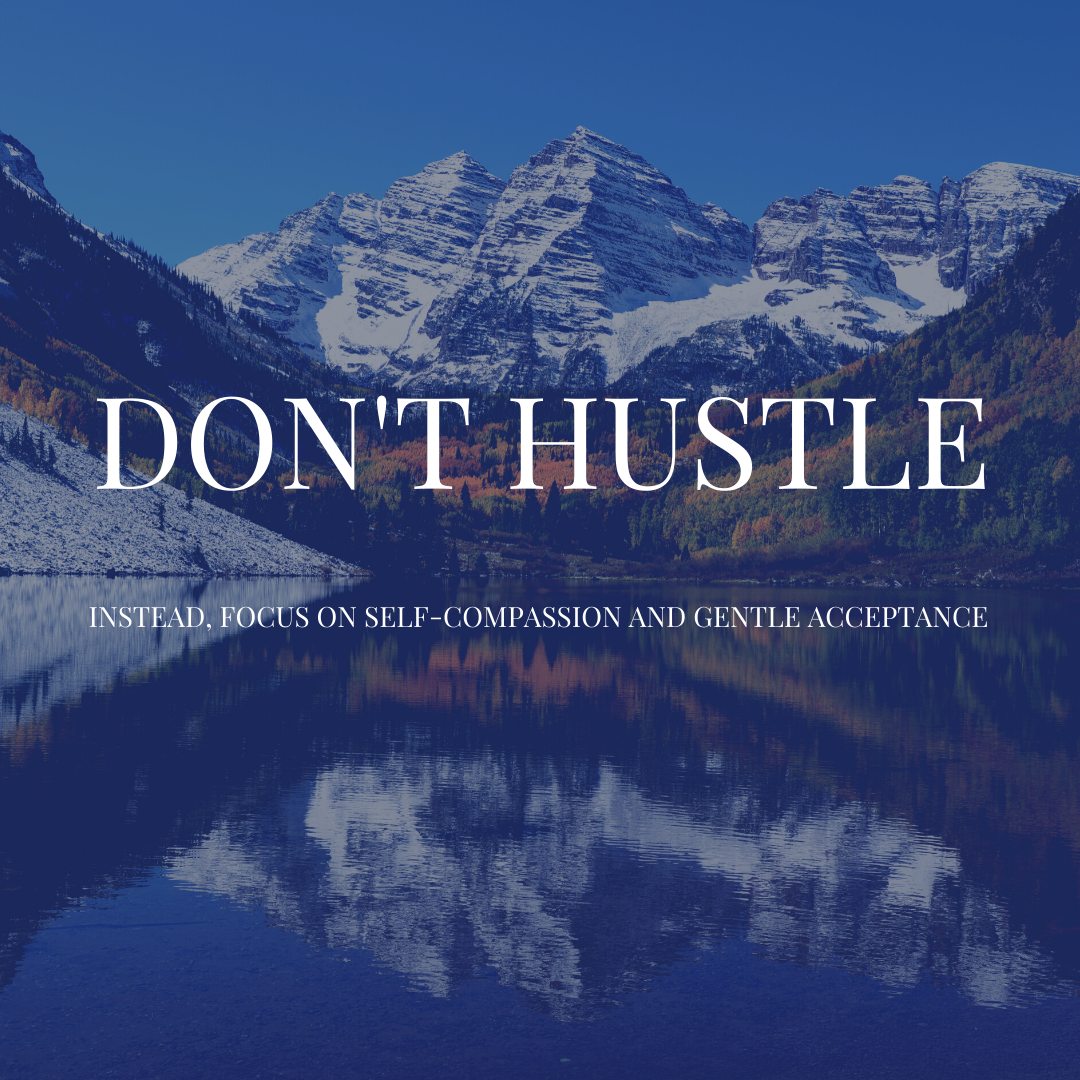 There are a lot of memes and graphics floating around that talk about how, if you don’t come out of this global pandemic with a new skill, a new invention, a new body, a new something…that you will have wasted this time you’re sheltering in place.

A couple of days ago, I saw a graphic that listed all of the companies that didn’t exist before the Great Recession, including Venmo, Uber, Snapchat, Twitter, and more.

The hustle mentality isn’t right for right now—and shaming people who don’t have the time (or don’t take the supposed extra time they have) to do something new is the absolute wrong thing to do.

We Have Anticipatory Grief

The Great Recession, the dot com bubble burst, and 9/11 have all happened in the last 20 years.

All three were the same in some respects, but very different in others. Yes, they were the same in that unemployment was high, organizations went out of business, people were unable to pay their bills, and, particularly during 9/11, the country mourned.

But we didn’t also have the grief that we have today—and that’s what we’re all experiencing.

What we feel is, what the experts call, “anticipatory grief.”

This is the feeling we get about what the future holds when we’re uncertain. It usually centers on death. We feel it when someone gets a dire diagnosis or when we have the normal thought that we’ll lose a parent someday.

Anticipatory grief is also more broadly about imagined futures. There is a storm coming. There’s something bad out there.

With the coronavirus, this kind of grief is confusing for all of us. Our primitive mind knows something bad is happening, but we can’t see it. This breaks our sense of safety and we feel that loss of safety.

To boot, we don’t see a light at the end of the tunnel.

We’re smack dab in the middle of the tunnel and we don’t know how much further we have to keep digging.

In Chicago, they finally announced we won’t be going back to school this school year. Wisconsin has shelter in place until May 26. Yet, Florida just reopened its beaches.

It’s all happening in dribs and drabs and that’s enough to test all of our cognitive energy.

So this idea that we can do something new with all of our free time is ludicrous.

Every single one of us is grieving.

We’re certainly at different stages and maybe some of us have the ability to add something new right now. That’s fantastic! I wish I were there. I do.

Some of us do have more free time because we’ve lost our jobs or lost clients or work is just going at a much slower pace.

And how you fill that time is up to you. Not to your friends or family. Not to your colleagues or your clients or boss. And certainly not to the people out there telling you to use your hustle mentality to create and innovate.

Think about it like this: many of you have lost people who have been very near to you—parents, children, a spouse, close friends, a sibling.

During your time of grief, were you able to be innovative and creative?

In the first several weeks afterward, did you have time to think about all the new things you were going to learn and do? Or were you paralyzed to the point that you didn’t know if you could get out of bed?

Did people tell you to put your big pants on and create something new?

They knew you were grieving.

Yet, as we all deal with the loss of something right now, there are people out there saying things such as:

Let Me Get Right On That

Here is what I would like to say to people like that: here is my first grader.

She starts her day at 9 a.m. with morning meeting and then she has to do “wake-up” work. From there, she does phonics and then recess. Then we dig back into schoolwork and do literacy and math. And you have to record her doing everything to prove to her teachers that she’s doing the work as requested.

In between you acting like the first grade teacher and videographer and parent at once, you will also handle client calls and Zoom meetings and try to accomplish the things on your list that don’t take a lot of brain power or time, but do need to be done.

And, because you are at a new stage in your grief journey, it will take you longer to do those things because your brain is processing a future that isn’t yet clear.

Let me get right  on starting a new business or learning a new skill.

In other words, bite me.

A trauma psychologist from Beirut did not mince words when responding to this idea that we should be extra productive right now.

I thought I was spared the horrid ‘motivational’ phrase going around now—’If you don’t come out of this with a new skill, you never lacked time, you lacked discipline’—until I saw it on my local yoga studio page.

As a trauma psychologist, I am utterly utterly horrified, enraged, and bewildered about how people can believe and spread this phrase in good conscience.

We are going through a collective trauma, that is bringing up profound grief, loss, panic over livelihoods, panic over loss of lives of loved ones. People’s nervous systems are barely coping with the sense of threat and vigilance for safety, or alternating with feeling numb and frozen and shutting down in response to it all.

People are trying to survive poverty, fear, retriggering of trauma, retriggering of other mental health difficulties. Yet, someone has the nerve to accuse someone of lack of discipline for not learning a new skill, and by a yoga teacher!

This cultural obsession with [capitalistic] ‘productivity’ and always spending time in a ‘productive,’ ‘fruitful’ way is absolutely maddening.

What we need is more self-compassion, more gentle acceptance of all the difficult emotions coming up for us now, more focus on gentle ways to soothe ourselves and our pain and the pain of loved ones around us, not a whipping by some random jerk making us feel worse about ourselves in the name of ‘motivation.

Our Cognitive Energy Is Too Taxed

I mentioned earlier that the dot com bubble burst, 9/11, and the Great Recession were different in that they didn’t create the kind of grief we’re experiencing right now.

Nor did they require us to be teachers, parents, spouses, housekeepers, chefs, employees, bosses, clients, and individuals all at once.

I read somewhere that there is a reason we’re either working parents or stay-at-home parents…because it’s impossible to do both at the same time.

And, right now, we’re being asked to do the same thing at the same time.

During the Great Recession, we lost 50% of our revenue and I did have a bunch of time on my hands.

Sure, I had grief over the loss of the clients and the team I had to lay off.

But it wasn’t the same.

And, because I’m type A to the nth degree, I spent a lot of time hustling and creating.

I wrote two books in the span of 18 months. I launched online courses and traveled the world, speaking and promoting said books.

There is no way on earth I could do those things today.

Even if I weren’t also a first grade teacher, my cognitive energy is taxed in a way I’ve never experienced—and I’ll bet yours is, too.

If it takes you twice as long to do things as is normal for you, that’s OK!

If you have a great day one day and a terrible one the next, that’s OK!

There will be some days that you do nothing but hide under the covers and watch Netflix, and that’s OK!

(As an aside, I just finished season three of Ozark and HOLY COW! I won’t ruin it for those of you who haven’t yet seen it, but holy cow.)

We’re In This At the Same Time

If you have a day where your creativity is on high drive, take advantage!

Whatever it happens to be, write it down and attend to it, in pieces, when you have a fantastic day and a burst of creative energy.

And don’t beat yourself up if you have to let it sit for a few days or weeks or even months.

People keep saying we’re all in this together.

We all are experiencing it differently.

Some of us have small children at home whom we’re trying to homeschool at the same time as work or run a business.

Some have kids who won’t go to prom or graduate with their friends.

Others have kids who may have to take a gap year because the college of their choice won’t be starting until January.

Some have aging parents who are quarantined with people who have the virus.

Others had to stop dating or stop seeing their special friend.

Some have lost their jobs and can’t find new because no one is hiring.

Don’t shame people for how they’re handling their grief.

Some of us show it differently than others, but we’re all grieving.

If you come out of this as a survivor, you will have done exactly what you needed to do.

The Spin Sucks Community Is Here For You

I’ll get off my soapbox now.

While your experience might be exactly the same or completely different than mine, I am here for you.

If you need an ear to bend or a shoulder to cry on, we can support one another.

Of course, I think the Spin Sucks community is the best on the internet, but you’ll not find a group of communicators that is more supportive and inclusive and kind than there.

If you’re not already there, click this link to join.

And if you are already there and afraid to speak up, direct message me or someone from the Spin Sucks team.