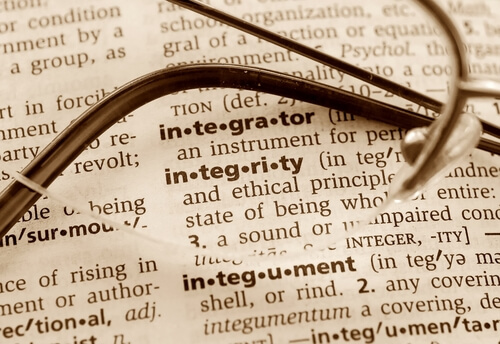 On Saturday, I am giving the commencement speech at Tribeca Flashpoint College, which is both exciting and terrifying.

(Don’t worry. There will be video so I will post that and my script here sometime in the next few weeks.)

Because this is something I’ve not done and because it’s much harder to give a 10 minute speech than an hour presentation, I hired a coach—Brian Burkhart from Square Planet.

If you read this blog consistently, you can probably guess what the theme of my speech is about.

It’s about integrity, which—after rehearsal on Monday—led Brian and I down a path to discuss the matter as it relates to business.

Integrity Means Doing What You Say You’ll Do

He told me they have a rule: If you don’t see any value in the work you did with him or his team, he’ll refund your money.

(Side note: They are worth every penny so I imagine refunding people’s money doesn’t happen very often.)

Then he told me a story of a client with whom they worked who, just after a month or two, decided it wasn’t working out.

They never said they didn’t see any value. On the contrary, they told Brian to keep the deposit they had sent.

But here is where his integrity comes into play. He said,

You didn’t see any value, at least not enough to continue the relationship, so I am sending your money back.

Imagine how that changes the conversation in the former client’s mind.

Before, they might have said to someone, “Yeah, we worked with Square Planet and it was alright. We didn’t really get much value from it.”

Now the conversation changes to, “We worked with Square Planet and I totally recommend them. While they didn’t work out for us, they have tons of integrity so I feel comfortable saying you should at least meet with them.”

In another example, we have a former client that didn’t get their second round of funding when they expected to.

There was a lot of speculation and no one was really saying squat.

We kept hearing, “We’ll get you paid. Just give us another 30 days.”

But there was no movement and I was just about ready to get our attorney involved.

Then, on a Sunday afternoon in February, their founder called me. He apologized for interrupting my weekend and for not calling me sooner, and went on to explain he wanted to have a conversation with me outside of the office.

We chatted for a few minutes and, during that time, he told me exactly what was going on, his solutions to fix it, and how long he thought it would be before he could make good on our past due invoices.

After that call, I sent an email to our CFO and our attorney to make sure we were covered both financially and legally and set some wheels in motion.

On our side, we looked at giving them a loan, creating convertible debt, or taking equity.

It took us another 30 days to create a deal that worked for both of us, and I learned a ton.

(We ended up giving them a loan with interest that is paid in full when there is a company event.)

But here is what has been the most incredible about this experience: Many leaders would embellish the situation to make it look better for them.

They might say, “Oh, we have a deal in the works that we expect to close in 15 days.”

But with this client, everything he has said has been the absolute truth.

On numerous occasions, I asked him to send me paperwork to back up his claims and, not only did he do it, he did so immediately, which tells me he was being completely forthright.

He sent me full financials and gave me a long, hard look at the inner workings of the business.

Anything I asked, he obliged willingly and openly.

I may have frustrated him with all of my requests, but he never showed me any annoyance or irritation.

Integrity Means Doing Good When No One Is Looking

If you’ve been in the business world for any amount of time, you’ve likely come across situations like this: Clients don’t want to pay, vendors back out of deals, customers unrightfully complain.

You may even have had a boss ask you to do something that doesn’t feel right in your belly.

It’s unfortunate that it happens as much as it does.

What’s more unfortunate is, when someone acts like Brian did with his former client or how our client has with me, it’s newsworthy.

Because no one does it.

So I will leave you with a closing note, the same that I will leave the graduates of Flashpoint College this weekend, and that is, “Remember who you are and what you stand for.”

It may not be the easiest thing to do. It may be uncomfortable. But you will always come out on top if you have your integrity.