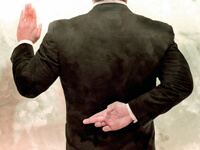 When I was a kid, I remember my dad coming home from work one day and saying a guy had been fired.

The image I had in my head was the guy literally on fire. I couldn’t understand a) why anyone would do that to another person and b) why that was okay.

In retrospect, I was probably eavesdropping on a conversation between my parents so it served me right to have that image and all those questions.

What I later learned – much, much later – is being a business leader isn’t always rainbows and sunshine.

Embezzlement and the IRS

In 2009, as the economy was crashing around us and organizations were shutting their doors, I learned the accountant we used had embezzled money from us.

We owed the IRS a lot of money that we thought we had already paid. Turned out, we had paid it to the accountant who never sent the check, but managed to cash it himself.

It was a great, big mess and it took a long time to figure out what had happened and how he had managed to get a check made out to the government cashed.

And, as the leader, I was responsible.

Even though I did everything I was supposed to have done and I had no idea this was going on, it was my responsibility.

There were lots of tears shed and I’m pretty sure I said, “This just isn’t fair” about six thousand times.

Being a Leader isn’t Always Fair

Sometimes the people you trust to do their jobs do bad things. And you have to take responsibility.

It isn’t right. It isn’t fair. But it’s part of being a leader.

A few months ago, we had a situation where an employee was accused of doing a bad thing. We took the appropriate measures to look into the accusation. We also had conversations with the accused and the accuser. We came up on the side of the employee.

But a couple of weeks ago, new evidence came to light and it pointed in favor of the accuser.

Imagine the panic I felt when this was brought to my attention. Not only did I defend the accused when the issue first came up, I did so very publicly. I completely and wholeheartedly trusted this person. But now the cold, hard facts in front of me proved otherwise.

In my hindsight, 20/20 vision, it’s easy to now see the one thing we missed when the situation occurred.

We missed it initially. I missed it.

I live and die by my ethics. The culture here is one of honesty, transparency, and accountability. We hire people who demonstrate those same characteristics.

I don’t think this person is bad. I don’t think this situation was done intentionally. It could have been a case of too much work or being overwhelmed or simply wanting to put a best foot forward without thinking through the consequences.

It happened. What’s done is done. I missed – or blissfully ignored – the facts.

Because of that, I owe the community here an apology. I was adamant the transgression hadn’t happened…and I pulled many of you into the conversation about it.

But we did do something unethical. It has been fixed. We now have a change in our process should this ever happen again.