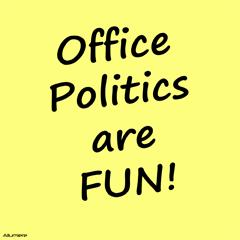 One of my guilty pleasures – particularly while I’m stuck riding my bike on the trainer during winter – is The Good Wife.

I have a serious girl crush on Alicia Florrick, aka Julianna Marguiles. It being set in Chicago also helps (though they get many things wrong).

One of my favorite conversations to date, when speaking about Governor Florrick, is this, “I know he’s guilty.” “How do you know?” “He’s the governor of Illinois.”

Or, as Jon Stewart puts it, you have a better chance of going to jail if you’re the governor of Illinois than if you kill someone.

This past week – without giving anything away – the American Bar Association invited Alicia to give the keynote address.

What it’s like to go from being an opt-out mom to partner and then founder of her own law firm in just four years…and she dealt with office politics.

It was a fun look back at how the show has evolved, but more importantly, it addressed office politics and other women’s issues in the workplace.

I was reminded of this episode while I read, “Office Politics: A Skill Women Should Lean Into” on the HBR blog.

The blog post talks about how women typically list office politics as one of their top three challenges at work.

The article goes on to list six things women should do to “lean into” office politics instead of shying away from them.

They include things such as:

If you haven’t already read it, I highly recommend it. Go see what each of those things mean, as they relate to your career growth. I promise it’s worth the few minutes it’ll take to read it.

But when I read the description for “get out,” I thought of Alicia Florrick interviewing with Will Gardner for her position at Lockhart Gardner.

Get Out: Speak up and actually ask for assignments, opportunities, perks, and promotions. In the process, don’t handicap yourself. For example, saying “I’m not good at politics” is a type of self-handicapping. As soon as you say it, you diminish your power and put yourself in a position of having to overcome an obstacle you’ve put in your own way.

During her keynote, she describes the interview and jokes that she gave Will every reason to not hire her: She’d been out of the workforce for 13 years, she was the shamed spouse of the then imprisoned governor, and myriad other reasons.

But it’s something we do, sometimes without even realizing it.

We self-handicap ourselves, not just by saying, “I’m not good at office politics,” but also by believing if we work hard and keep our heads down, someone will notice and promote us.

Maybe they will and maybe they won’t, but that puts us at the mercy of someone else and takes the control of our own destiny out of our hands.

Ask for What You Want

I work with a group of extremely talented people. The majority of them are women.

And do you know, to this date – nearly nine years after I started Arment Dietrich – the only people who have ever asked me for a raise are men?

Sure, I try to do a pretty good job of recognizing the hard work long before a raise or promotion is due, but not once has a woman on my team come to me with a laid out plan of why she deserves something she wants.

Men don’t typically have a problem with asking for what they want and they certainly don’t self-handicap by providing a list of reasons you wouldn’t want to give them a raise or promotion.

Control Your Own Destiny

There isn’t a clearcut answer on why women do this, but what is clear is we can’t stand on the sidelines and wait for someone to notice.

Go out there. Harness your career. Ask for what you think you deserve. Take credit when appropriate. Be collaborative. Build up your team. And support the growth of others.

Get those self-induced obstacles out your way and control your own destiny.