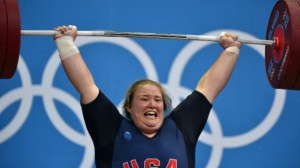 I vividly remember doing something unladylike to make my brothers laugh (probably burping) and my dad pulling me aside to lecture me. I remember him saying, “Have you ever heard your mom do that? Girls don’t act like boys.” And, in fact, I never have heard or seen my mom do anything unladylike.

Because of the way I was raised, it’s taken me a very long time to be confident enough in my athleticism to get out and ride with the boys, even if it means I’m dripping sweat with them. And if the roads are wet? Forget about it! I’ll be gross and dirty with everyone else who rides through puddles of rain and mud.

But it wasn’t just the way I grew up. It’s society. It’s our culture. It’s the culture around the world. Girls are supposed to act like, well, girls.

On Saturday mornings, I ride a little bit later so I can sleep in and have a latte before I get out there. But that also means I typically walk Jack Bauer in my cycling spandex. A few years ago I never would have done that. Let the neighbors see me in my workout gear? OMG!

Now I do it just to see what they’ll say. And comment they do! I’ve heard everything from, “If I had a body like that, I’d wear spandex too!” to “Are you wearing that to support the Tour de France?”

Yes, I wear cycling spandex because the Tour is on. Right.

This past weekend, Margie Clayman sent me an article from Salon titled, “Athletes Don’t Wear Heels,” which explores this very idea.

Girls aren’t allowed, by society’s measures, to act (or heaven forbid, look) like their male counterparts.

And what better time to explore what female athletes wear and how they act than during the Olympics?

Until this year, the International Olympic Committee required skirts for tennis and bikinis for beach volleyball. But it’s chilly in London so they’ve been “allowed” to wear more clothes – even long-sleeved shirts, pants, and jackets.

And the media typically only shows – and reports on – the athletes who demonstrate beauty and grace in sports, such as gymnastics and ice skating.

In fact, Australian swimmer Leisel Jones was shamed by the media for weighing 150 pounds. And Conan O’Brien (shame on him!) mocked weightlifter Holley Mangold for weighing 350 pounds (who, by-the-way, can lift nearly 600 pounds and could take Conan’s lunch without a fight).

These are great examples of how screwed up our brains are. Jones might very well be the very best female breaststrokers the world has ever seen, but we’re worried about how much she weighs?

Has anyone ever discovered that muscle does, in fact, weigh more than fat?

I wish I could see a show of hands when I ask this question: How many of you would prefer to see an athletic woman to one who starves herself in order to stay skinny?

We all have this vision of what women are supposed to look like, how they’re supposed to act, and what makes them ladylike. And I know most of us think it’s more a Victoria’s Secret model than a 350-pound weightlifter.

I love a beautiful woman as much as anyone else, but the women I find beautiful? The ones who take care of themselves, who have calves that make me envious (I work really hard at mine), and who make you say, “Man, that girl is ripped!” as she passes you while you contemplate getting off the couch.

This year marks the very first Olympics that have female athletes from every nation. Perhaps that means things will begin to change and female athletes will be revered (instead of scorned) for looking and acting like their male counterparts.