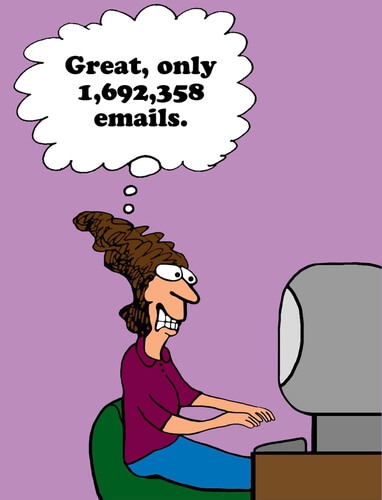 About a thousand years ago (OK, maybe it was more like eight years ago), Arment Dietrich had a bad morale issue.

I mean, it was BAD…and I couldn’t figure out what was going on.

At the time, I was working with (the very best) a leadership coach and he and I went round and round, trying to figure out why it was so bad.

He had me test different things in staff meetings. That didn’t work. Everyone seemed happy…to my face.

He had me try informal meetings with our mid-level team. Same thing. Everyone seemed happy.

And then, one day I was standing at the copier, waiting for something to print (I told you it was a thousand years ago) and an email printed.

It was from one of our mid-level managers to a newly minted college graduate.

It was the rudest, most condescending email I had ever read. Even I got angry. And it wasn’t directed at me.

Suddenly I knew what was happening: The team—particularly our mid-level managers—were using email to communicate. And not just communicate but say horrible things to one another. Things they would never say in person.

The younger professionals didn’t dare tell me and, of course, the offenders would never have admitted it.

So I got our IT contractor on the phone and I asked him if we could shut off all internal email. He said we could.

We also did a lot of professional development around how to speak to colleagues…and most definitely how not to behave.

It took a long time, but we eventually turned it around and everyone eventually had internal email returned.

But we had an unintended consequence of going nearly a month without email: Everyone stopped using it as a life source.

They learned to find their own answers instead of sending an email to ask someone else (my favorite thing to send to someone who should have Googled something instead of asked me is LMGTFY).

This not only helped them become more productive and work smarter, but learn how to come to meetings prepared with solutions instead of problems.

The problems that seemed like gigantic issues where dissolved by the time the meeting happened and things seemed much less stressful.

Suddenly we went from this horrible morale and terrible culture to one where everyone was collaborative and engaged.

(I also had to fire one person because she couldn’t get over her power trip…and that helped morale, as well.)

Email is Used for Evil

Fast forward to last week and Mr. D and I were having a conversation about email.

He told me he knows I believe it’s eventually going to go away, but he doesn’t see it. He said he thinks new college graduates will be forced to use it when they enter the work world and it will just perpetuate itself.

But I see it differently.

Not only is it a real nuisance because it’s not used correctly, but today there are tools such as Slack (which we adore here) and SaneBox (which I still want to marry) that allow you to be rid of email, once and for all.

Not all email, of course, and there certainly is a place for it (it’s our number one driver of sales, for instance), but it has to be used for good.

The One Week, No Email Challenge

I wonder if you’re all in for a one week challenge?

What if you told your colleagues you were not going to use email for one week? What do you think would happen?

I already know I’m going to be met with resistance from some of you, but think about the person inside your organization who never answers your emails.

How do you handle him or her?

I’m willing to bet you walk into his or her office or you make a phone call. That person is training you to communicate with them differently.

You can do the same.

Just start internally (external you can’t really control) and see what happens. For one week.

If it’s more appealing to not stop written communication altogether, create a Slack account (it’s free) and invite your colleagues to join you there.

See what happens. I’m willing to bet the world won’t end and your inbox will be a much more manageable place.

Not only that, but I’m willing to bet you are far more productive, which will lead to you being happier and give you more time to try to beat me in steps on the FitBit (or have work/life balance or go golfing or do whatever it is that makes you happy).

Try it. See what happens. I’ll expect a report back.