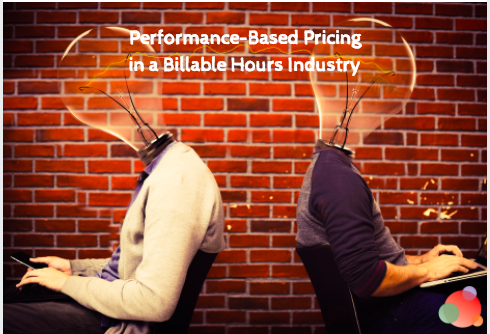 Earlier this week, we talked about the importance of tracking your time.

It’s not something people love to do, but it’s a necessity when you sell your time for a living.

It provides you a really good grasp on how long it takes you to do certain tasks, and how much they actually cost.

When, in fact, it costs you $9,000 a month and everyone is running ragged—and you become resentful and feel taken advantage of.

On the flip side, what if you’re working with a client and provide an idea that makes them a million dollars…or more?

I’m often reminded of the “Got Milk?” campaign. That idea was used for more than 20 years—and it’s likely the agency that came up with it isn’t receiving royalties.

I think so. That’s where performance-based pricing comes into play.

I recently read an article about Ellen Pompeo and how she’s slowing inching her way toward being the highest paid actress on TV.

Pompeo’s new pact will have her earning more than $20 million a year — $575,000 per episode, along with a seven-figure signing bonus and two full backend equity points on the series, estimated to bring in another $6 million to $7 million.

She also will get a producing fee plus backend on this spring’s Grey’s spinoff as well as put pilot commitments and office space for her Calamity Jane production company on Disney’s Burbank lot. Already, she has a legal drama in contention at ABC, and she recently sold an anthology drama to Amazon, which will focus each season on a different American fashion designer’s rise to prominence.

Let’s look at this from your perspective.

You are working with a client and they pay you $60,000 a year. This is akin to the money Pompeo makes per episode.

(This also works if you’re in-house; just use your salary as the metric here.)

During a communications meeting in the third month, you are presented with a challenge—the client’s industry is dying and it needs a major refresh.

Through several brainstorms, you come up with a brilliant idea that is going to raise awareness, generate leads, and close them…all giving life back to this industry.

As part of your contract, you have already negotiated a percentage of sales you help to convert—let’s call it two percent.

The organization goes on to make $1.2MM a year, from your efforts—and your idea—alone.

(This is what Pompeo has done with her backend equity points.)

Is it Too Risky?

There also are plenty of opportunities for you to ask for equity in a business—and it’s something you can always re-negotiate after you’ve begun the work.

Our contracts are written as such that we can ask for equity and a percentage of sales in year two.

We’ve found that year one rarely provides the kind of opportunity to take a percentage of sales.

But by year two, we’re so deep inside the organization, it would be dumb of not to negotiate that.

With performance-based pricing, we’ve made significant money doing this—and we’ve also made a full sum of $0.

It’s risky, for sure, but you still get paid the retainer (or salary) to do the work. So what’t the real risk?

That you might not generate enough sales to equate more money?

Who’s fault is that?

Challenges on the Agency (or Employee) Side

There are some challenges to this approach.

On our side, too often we are “measured” on number of impressions or number of Facebook fans—both of which are easy to game and neither of which result in sals.

Put something on BusinessWire and watch the impressions come in.

You don’t have to do any work and the perception is it’s been picked up all over the place, including USA Today and Yahoo!

Of course, if you go to those sites (or pick up the paper), you never find the story because it’s buried deep in some spot people don’t actually read.

But to an unsuspecting business owner, it looks like you’re doing your job…and they’re more than happy to pay the bill.

What doesn’t happen, though, is the phone doesn’t ring. There isn’t the publicity effect we perceive will happen when we’re all over the news. No one comes in or calls or visits or buys.

So the performance-based pricing sits very poorly with the organization’s leaders because, while it looks like the job was done, they were focused on the wrong things.

Challenges on the Client (or Employer) Side

And, on the client (or employer) side, you learn the true colors of a person’s character when you work this way.

A few years ago, we had negotiated three percent of the sales we generated. It was a business we knew we could grow and we had a lot of experience in their industry.

I had worked with the CEO before and had incredible results with him so, when he asked me if I’d consider doing a percentage of profit instead of revenue, I didn’t blink.

We can’t control profit or of their expenses.

We can control conversion of sales through our efforts. It was so naive of me. So dumb.

The first year we didn’t have the deal so we were excited to go into year two.

And, at the end of year two, we had the results!

Mind Your Ps and Qs

We’d generated $2.8MM in new revenue for them—and with their traditional 32 percent profitability, we knew we had a $27,000 check coming.

It wasn’t a ton of money, but it was better than $0 and I tried really hard not to kick myself for the agreement.

And then the client called me and said they hadn’t made a profit that year. It’d been a year of investment and growth so he wasn’t able to pay us for on our performance-based pricing deal.

He said he had a gift for me, though, and he would drop it off in a couple of hours.

He pulled up in front of our office, in his BRAND NEW COMPANY CAR with the dealer tags still on it.

The gift was some art he thought would look nice hanging in our lobby.

To this day, I look at that and remind myself of the stupid agreement I made.

Can Performance-Based Pricing Work in PR?

We are meticulous in working with our clients to deliver results that drive real business success.

It’s pretty demoralizing when you can prove you’ve generated revenue for an organization—only to have your retainer or salary remain the same, year-after-year.

Performance-based pricing in the PR industry isn’t something that is done consistently.

What do you think? Can performance-based pricing be done in an industry that is notorious for billable hours and retainers?