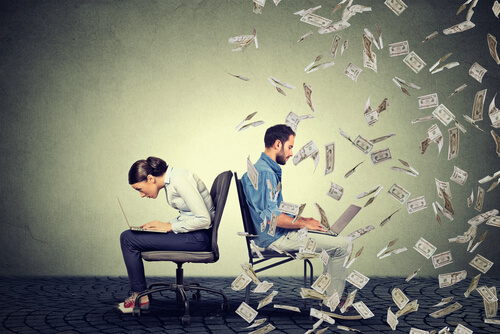 It’s 2017—a full 54 years after the Equal Pay Act went into effect—and yet we’re still years away from full wage parity.

According to the American Association of University Women, the U.S. won’t get there for another 135 years.

Gender pay gap disparities act like hurdles in the path to retirement, homeownership, or even apartment affordability.

This affects everyone on the market, either directly or indirectly, myself included.

If, as a man in PR, I find my rent expensive, what are my female counterparts experiencing?

ABODO, an apartment marketplace, delved into some of the factors—including career, location, and housing—that go into the pay gap.

In their recent analysis of Census data, they found full-time women nationwide earn 78.9 cents for every dollar men earn.

Also abiding by the HUD’s guidelines for housing cost burdens—women can afford to rent 1,143 square feet, whereas men can afford 1,448.

Many industries—including sales, production, health care, and legal—fall far behind that benchmark.

PR and marketing, fortunately, have a solid lead on that national figure.

The U.S. Bureau of Labor Statistics puts PR and marketing jobs into the arts, design, entertainment, sports, and media category.

Thus it has a fairly even gender distribution—58 percent male and 42 percent female—in which women make 85.8 cents to a man’s dollar.

Out of 25 occupation categories, PR and media has the tenth-lowest workplace gender gap.

It’s not equal pay, but it’s on its way to narrowing the gap.

Unfortunately, the gender pay gap isn’t as simple as that single figure—where you live and your specific job are also huge factors, according to the findings.

Could it be that women just choose lower-level or lower-paying positions?

Let’s look at a few examples:

Female workers in the “miscellaneous” communications and media category—likely where the census slots newer positions such as digital marketing specialist and social media managers—earn 82 percent as much as similarly positioned men.

Female media workers in Detroit, for example, earn just 74.6 cents to a man’s dollar (yielding women a 1,558-square-foot apartment versus 2,090 for men).

The gender pay gap for women in PR and media jobs varied widely, by nearly 20 cents across the cities in the study, with Detroit women earning the least:

Many of these figures fall in line with the general city trends regarding gender-disparate pay in all occupations: Detroit is one of the 10 worst MSAs in the country for equal pay (73.6), while both Miami (86.7) and New York (85.5) landed in the top 10.

On the Road to Equal Pay…But Slowly

Although some of these numbers are encouraging, the fact remains that in not one of the BLS’s 25 job categories do women earn more than 93.8 cents to a man’s dollar, and the PR world is no different.

Women are still less likely to negotiate their salaries, and more likely to see retaliation for doing so.

The Harvard Business Review reports that for women, nine percent of salary negotiations lead to a final wage below the initial offer.

And as lower earners, women can appear to be sub-par candidates for new jobs, next to their higher-earning male peers.

Fortunately, some cities are adopting new legislation to combat that vicious cycle, banning employers from collecting salary history from their applicants, and requiring a posted salary minimum.

These legislative steps can help disparate pay to level out—for women, minorities, and others—but general cultural attitudes have to advance as well.

Sam Radbil is a member of the marketing communications team at ABODO, an online apartment marketplace. ABODO was founded in 2013 in Madison, Wisconsin. In three years, the company has grown to 28 employees, raised over $8M in outside funding, and now helps more than half a million renters find a new home each month.

View all posts by Sam Radbil