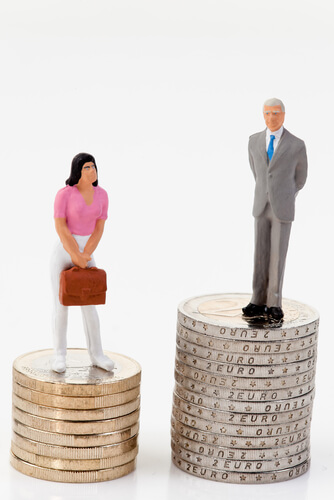 Nearly 10 years ago (!!!!), when I started Arment Dietrich, I sat in meeting after meeting where the (male) prospect would ask me when they got to meet my husband.

At first I thought, “Oh, how nice. They’d like to socialize with us.” And then I realized I was completely wrong.

I don’t remember what business it was today, but I remember we were in the final negotiations with a company to close the biggest contract we’d have had at that point.

The men showed up in our conference room, put their Halliburton briefcases on the table, took off their expensive suit jackets—Rolex watches gleaming in the sun that was coming through the window that faced east—and said they were ready to get down to business.

But, before they signed, they said, they had to meet my male partner.

“What do you mean?” one of the prospects asked. “Who is running your business?”

The other prospect looked at his business partner and they both slowly stood up. They put their jackets back on and said, “We can’t do business with you.”

To this day, that story shocks me. It was only 10 years ago and we still were in an environment where a man has to be in charge.

We find this less and less today because we have a history and many clients who serve as references for us, but it saddens me to learn it still happens.

Men in our industry are paid nearly $50,000 more than the women.

Which is crazy because it’s 2015 and because we are in a female-dominated industry. It’s anywhere between 73 and 85 percent female.

In fact, the more experienced you are, the worse it is.

This was the subject of last week’s Inside PR and I got pretty heated about it.

In some cases, some of my team make more money than I do (I take the risk and get paid on the upswing), but there has never been a male employee who has made more than his female counterpart in this organization.

Joe Thornley, my Inside PR co-host, said they don’t have salaries per title. He said he looks at experience and at how much an individual—male or female—can make for the company. That’s how he figures a person’s offer.

Martin Waxman, my other Inside PR co-host, said it’s been too long since he’s hired employees (he sold his business a few years ago).

Buffer, an organization not in PR, but one doing something really interesting, has open salaries.

They do this based on job type, experience, and location. They also throw in some industry requirements.

But the point here is, there is fairness in salaries out there. You just have to find the right organization.

What You Can Do

But these both may change the way you approach your salary.

For instance, I know for a fact that my male counterparts make quite a good deal more money than I do for speaking engagements—to the tune of $5,000-$15,000 more.

This year, I decided not only am I no longer going to do any free speaking engagements, I am going to walk away from those that won’t pay my full fee.

I have walked away from five opportunities this year, only to find out they hired a male colleague and paid him more than my quoted fee.

My perspective on that is that at least I didn’t have to be away from the office (and from home) for 15 days or more for those engagements. I’m fully billable when I’m sitting at my desk so it’s not lost income.

For employees, particularly women: Stand up for yourself when you are offered a new job. Negotiate your salary. Ask if the organization has transparent salaries. That’s a good start.

For employers: Start with the same salary per title. Then think about a move to transparent salaries. The Buffer model is a good one. You can steal it.

The only way we can close this gap is if we force it. So go do it!