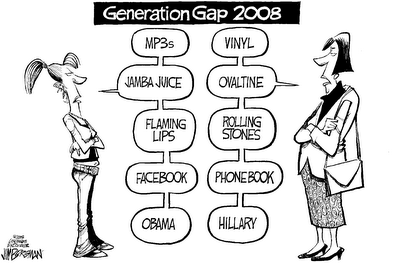 “A good 65 percent of today’s grade-school kids may end up doing work that hasn’t been invented yet.” – Cathy Davidson, co-director of the annual MacArthur Foundation Digital Media and Learning Competitions

I saw a stat the other day that said most grade school kids aren’t learning cursive handwriting anymore. It’s pretty clear paper will eventually be extinct. Does that mean the next generation won’t write long hand?

Now we’re discovering these same kids will enter the workforce and do something that doesn’t yet exist. Still, our school system is preparing them for a world not one of us will recognize. And, as business leaders, we keep expecting to go back to the way things have always been done. But the economy and technology have changed things so quickly in the past three years, we’ll never go back to the way things were. Ever.

So why do we keep insisting they will?

A new book, “Now You See It,” by Cathy Davidson explores the idea that we can’t keep ignoring the “formidable cognitive skills” Generation Y and younger are developing. She also suggests we must stop disparaging digital prowess just because some of us don’t possess it.

She says, “A grudge match with the young can sabotage an entire culture.”

And still, we have a grudge match with the young.

No matter where I am or what type of business leader I’m working with, I hear the same things: “My customer isn’t 20 years old” or “my customer doesn’t use the Internet.” Business leaders who refuse to acknowledge that the way they’ve always done business has inherently changed…and it’s not going back.

Sure, most of us are straddling generations. You still have the Baby Boomer customer who prefers to do business by looking at the whites of your eyes. And you have late Generation X and Generation Y influencing purchase decisions, but not yet the decision maker, and they build trust by what they read and relationships they’ve built online. So we have to cater to both.

I don’t want to hear the “I’ll retire before I have to deal with this” excuse. That’s a cop out and a lousy excuse. Retirement is getting later and later and technology is moving so quickly it’ll catch up to you before you have the chance to play golf all day.

Stop holding a grudge match with the young professionals. Stop sabotaging a culture.

Instead start blazing the trail for your industry…before your competition does it for you.

This first ran as my weekly Crain’s Chicago Business column.