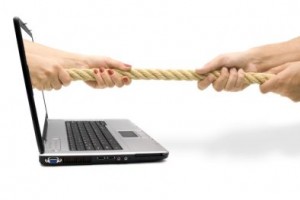 Four years ago, I was invited to do my very first webinar. It was for Vistage and it launched my speaking career.

I’ll never forget the very first speaking engagement I did for them. It was in Washington, D.C. I was 30 minutes late to the meeting because I got lost and traffic was worse than I expected. Then, when I arrived, they didn’t have a projector or screen. So I had to talk from slides on my laptop.

My “leave-behind” was electronic and I’ll never forget a member saying to me, “You’re smart and you’re nice to look at, but you have to be better prepared. That includes having something with your contact information to actually hand us.”

Back then, I’d walk into the room to talk about how to use the web to drive business growth and I’d get, “Oh Facebook is for my kids.” Or, “By the time the kids using text messaging to communicate get into a position of power, I’ll be retired.”

When Geoff Livingston and I were writing Marketing in the Round, we referred to the 2011 IBM Global Technology Study, which showed the anecdotal information I was collecting was right on par with what other business leaders around the world were saying.

But today? Today the conversation has gone from “it’s a fad,” to “I’d better figure this out or my company is going to get left behind.”

And the 2012 IBM CEO Study confirms it once again.

They surveyed 1,709 CEOS from 64 countries and 18 industries, and learned social media will leap to the number two spot while traditional media plunges to the bottom in the next three to five years.

The study also found more business leaders are moving toward a more social workplace, as the best ones already have. IBM broke out the surveyed companies to see which ones were in the top 20 percent, in terms of revenue and growth, and found those were the companies already becoming more social.

What About Big Data?

But they aren’t all gung ho about it, nor are they as excited as some (cough, me, cough) about Big Data.

Still looking at the CEOs, split by high growth and underperforming companies, 54 percent of the fastest growing organizations said they have access to and draw insights from data.

Only 26 percent of the underperforming organizations said the same.

What this tells us is something Jack Welch incorporated into GE when he was leading the company to global growth: The 10/80/10 rule.

Ten percent of companies will outperform their competitors because they’re willing to take risk, able to incorporate technology at a quicker pace, and learning to adapt to customer’s needs.

In what would have taken 20 years or more to affect businesses, that 80 percent of business leaders – in just four short years – are learning they can no longer sit on the fence and wait to see what happens.

It’s happening. Now. Social media is replacing email, the phone, and the fax machine. It’s time to get your entire organization on board.