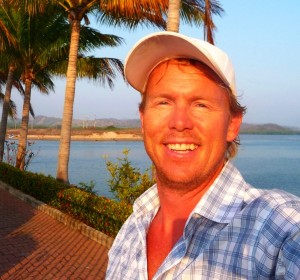 David Kilmer works for Blue 541 and Coeur d’Alene Magazine, frequently from a boat in a warm place.

In this little Mexico surf town, there’s yoga on the beach every morning.

It’s one of many reasons my boat is anchored here in Barra de Navidad at the moment. For four or five months out of the year – I’ll admit it’s easy to lose track – this 36-foot sailboat named Liberte is my home, office, fun ticket and window on the world.

And despite the very pleasant distractions – or more likely, because of them – I’ve found I do pretty good work here.

Some of the people I trade messages with back in the real world (or the unreal world) know I’m somewhere in a southern latitude; some don’t. It doesn’t much matter. What does count for me, as a writer and PR rep, is increasingly a certain way of seeing things, a desire to cut to the core.

As Mark Twain said, sometimes you need to take your brain out and stomp on it. This marvelously unpredictable, often vagabond boat life does the trick, all right. Out here, the crap is cut away, and you’re left with simple rhythms, bright focus and ideas that flow as generously as Nature intended.

You know exactly what I’m talking about.

Say you’re on deadline, and the harder you stare at the screen or squeeze the keyboard, the more elusive things become. Give it up. You know good and well that the lusted-after tagline, the brilliant concept, will come to you quite gracefully once you abandon the chase. Go run a trail, throw a stick for the dog, wind out the throttle, and bang, there it is. Turn your back on the thing and it appears.

In a larger sense, that’s what I’ve done by sailing off the map. I’ve abandoned the familiar for the strange, and I’ve been incredibly rewarded. It’s hard to explain how powerful this can be. I highly recommend it – in whatever form it might take for you.

So went my yoga teacher’s words this very morning, uttered in her ever-so-enchanting accent, as we went happily into the last pose of the day, sprawled on our backs on the sand looking up at the palm trees and mind-blowing blue space above (hmmm, or were we really looking down?).

I liked the sound of that.

Just like you, I’m wired to get a giant buzz off the “doing.” Turns out a dose or two of “being” might be just as valuable to our cause – maybe a lot more.

As I tap this out on the iPad under the tropical night sky, my boat dog Samantha curled against my bare feet like a little Muse, and a rum drink perhaps not too far away, I wish for you, amidst all the very necessary doing of our profession, some being, too.

Our clients deserve it, our creativity deserves it, and damn it, most of all – so do we.

Stomp away, amigos. Stomp away.

David Kilmer works for Blue 541 and Coeur d’Alene Magazine, frequently from a boat in a warm place.