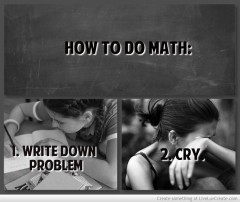 A few years back, I dropped “Made to Stick” onto my Kobo.

I’ve read it, digitally dog-eared and highlighted pages of it, and definitely won’t delete it.

In the book, authors (and brothers) Dan and Chip Heath talk about the Curse of Knowledge.

The Curse of Knowledge is this: Once you’ve learned something, you can’t unlearn it. More importantly however, you automatically forget what it’s like to NOT know it.

You lose the ability to relate to the guy who doesn’t get it. “Come on!!” you say to yourself, “It’s so EASY!!” You can’t empathize.

There’s a cool study quoted in the book relating to communication skills. In the study, there were tappers and there were listeners. The tappers had to tap out the tune of a song, on a tabletop, and the listeners had to guess the tune.

The tappers – who, naturally, knew the tune they were tapping – estimated their listeners would guess correctly 50 percent of the time. The actual correct guess rate was closer to three percent.

Not only were the tappers off the charts in their assumptions, something else neat happened. They got seriously annoyed when their listeners couldn’t guess the tune! Of course they did. The tappers had the curse of knowledge.

Next time you’re talking to staff, or giving employees direction on a project, keep the Curse of Knowledge in mind. YOU might know exactly what you mean – but they might need it spelled out clearer for them.

Which brings me to the point of this post. Communicating information.

One Size Does Not Fit All

Many of you know I’m numbers-phobic. I just don’t get them. Numbers and statistics are the spawn of the devil, IMHO. And after I read Make it Stick, I had some insight into the frustration other people would exhibit when I stared slack jawed and drooling at a graph or chart. THEY have the curse of knowledge.

Your board room or auditorium will most likely be populated by other number phobes. But the analogy goes further. When presenting any type of subject matter there will be tappers and listeners. So, if you’re blessed with an analytical mind and a natural facility with statistics and analytics, be kind to your mathematically disinclined pals and present your information in ways that make sense to those of us who can’t do grade five math.

So, how do you present your valuable data in a memorable way, while not leave half the room out in the cold? Pulled from “Make it Stick,” here are six things to consider.

Simplicity: Become a master at exclusion. Find the essential core of what you are presenting. Then present that. Make a memorable first statement that is simple yet profound.

Unexpectedness: Violate your audience’s expectations. Which would resonate more viscerally? Numbers, graphs, and charts showing how unhealthy movie popcorn is, or an image of a full day’s fat and sodium intake laid out as hamburgers, steaks, and French fries? Exactly.

Concreteness: Mission statements and strategies are often ambiguous to the point of being meaningless. Use concrete language and data, examples, and images. There’s a reason urban myths are sticky. They resonate because they are filled with concrete images of razor blades and ice-filled bathtubs.

Credibility: When trying to build a case for something, certain people automatically reach for the numerical data to back it up. But what do those numbers really mean? Remember simplicity. Case in point: During the 1980 presidential debate between Carter and Reagan, instead of spouting off stats about the state of the economy, Reagan asked a simple question: “…are we better off today than we were four years ago?”

Emotions: Make people feel something. The popcorn example is a classic. The statement “37 grams of fat” doesn’t elicit emotions. But a fat laden table does. Not only will people truly understand what 37 grams really means, they’ll remember it.

Stories: All of the above principals can be found in a great story. Remember the stunning 1984 ad by Apple? Of course you do. Because it told a compelling story, start to finish. It was simple, unexpected, concrete, credible, and played brilliantly on people’s natural desire to break away from the mundane.

There are always arguments about mathematical literacy. Are some people more predisposed than others? Or is that hogwash?

The brain is a long way away from being fully understood. But either way, the next time you’re getting frustrated by a person’s inability to grasp a concept – any concept – remember the curse of knowledge.

Then take a deep breath and start again.