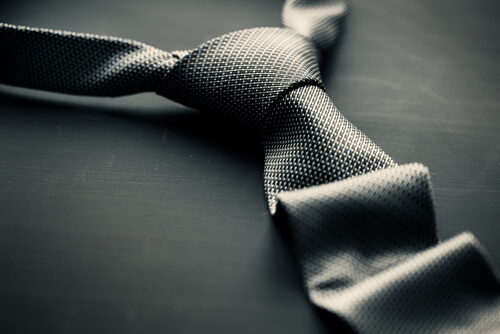 The necktie, that seemingly arbitrary and ridiculous piece of fabric that is at once both the epitome of form over function—and the modern symbol of a disillusioning, 9 to 5, soul-sucking job—has been around in one form or another since Ancient China circa 200 B.C.

The army of Emperor Qin Shih Huang, China’s first emperor, had wrapped cloths around their necks as part of their uniforms.

Wearing cloth around one’s neck became a prevalent symbol of distinction for soldiers in many Eastern regions.

Neckwear’s shift from a soldier’s accessory to the world of civilian fashion came about in 17th century France when the colorful neckwear that supporting Croatian soldiers wore inspired the common people to do the same.

These neckerchiefs became known as cravats and they would dominate the next few centuries of neckwear fashion.

Somewhere between Louis’ XIII and XIV, it was culturally decreed that hanging things from our necks would translate into distinction.

Since then, the shape and length of said things have varied fluidly, as have the ways they are fastened.

At the beginning of the 1900s, cravats shared popularity with ascots and bowties.

However, that would all change in 1924 when a New York necktie maker named Jesse Langsdorf started making ties out of three different pieces of material, introduced the slip stitch, and cut the material on a bias, preventing it from peskily curling to one side.

The modern necktie, as we know it today, was taking shape and the cravat was put on the sidelines.

The skinny necktie made its first appearance in the 1950s, a response to the more form-fitting clothing styles.

However, the 60s decided to take the opposite approach, giving birth to the kipper necktie with a six-inch width.

I imagine Sloppy Joe enthusiasts were all about these, saving a fortune by not having to dry clean their shirts so often.

Throughout the 70s, 80s, and 90s, necktie shape and size continued to ebb and flow, and different patterns, such a paisley and floral, offered ways for people to be expressive as they half-choked themselves.

It took nearly 400 years of class-distinguishing symbolism for the tie’s prevalence to be indicted, but recently the tie’s stranglehold appears to be waning.

There will, no doubt, be traditional diehards who won’t ever be caught dead in a meeting without a necktie.

However, in the last decade, the perception that a necktie indicates authority and respect the way a Tapout shirt indicates a vast literary knowledge has changed.

Specifically in the tech industry, entrepreneurs and CEOs are just as likely to wear Vibram FiveFingers and hoodies as they are to wear wingtips and tailored suits.

Some studies have emerged over the years about the connection between work attire and productivity.

One of the more prevalent ones was reported by Forbes in 2013.

In the study, participants were given a white lab coat to wear without any verbal cue and given attention-related tasks to complete.

The participants were then given the same coat and told it was a doctor’s coat.

Attention was heightened compared to when the same group of people then put the coats on again and were told they were painter’s coats.

So having a dress code can definitely be beneficial in the sense that it tells an individual, “These are my work clothes, it’s time to do work,” but the insistence that those clothes should include a necktie is only based on this being the norm for so long.

Sounds like maybe it should be a lab coat.

A lab coat is utilitarian. It has pockets that are never sewn shut, a comfortable fit, and it protects your clothes from potential damage.

A change may in fact be on the horizon, though.

With the dressed-down office cultures of companies such as Facebook, Google, and Zappos on the rise, a new meaning could be forthcoming for that tired maxim: “Dress for the job you want, not the one you have.”

Not being focused on one’s sense of fashion shouldn’t equate to a lack of respect for yourself.

I respect myself a lot, therefore I think I deserve to be comfortable and not in the least bit constricted while I work (within common laws of decency, of course).

Additionally, it shouldn’t equate to a lack of respect for potential customers and clients.

Why should the time I spend getting dressed in the morning play into how the goods and services I’m representing are perceived?

There are plenty of other client and customer-facing elements that should outstrip attire in terms of developing respect, such as punctuality, body language, knowledge, and active listening.

Lastly, and most importantly, the necktie is a symbol of the boardroom being an Old Boy’s Club.

They start 1,200 new companies every day.

Compare that to the year prior in which they started 740 per day.

It’s clearly time to usher in a new gender-neutral symbol.

So what is a necktie beyond just an outdated symbol that has held perceived value for centuries? What are clothes even? What’s this life really about?????

Cut to: Me joining a nudist cult full of rocket scientists intent on getting us all to Pluto to start anew.

What are your thoughts on the necktie? If you had your way, what would your company’s dress code be?