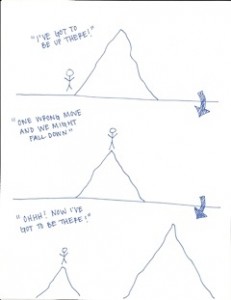 During the past five years, I’ve had the opportunity to work directly under someone (cough, Gini Dietrich) as she has evolved through each of the following entrepreneurial minds.

I’ve now come to a point where I think I’ve figured out how these minds work.  Yes, they say it’s lonely at the top for this select group of individuals, but because they move too fast for the rest of us to keep up, the loneliness is self-inflicted.

I’ve created a chart outlining the stages of an entrepreneurial mind to help the rest of us make it less lonely for our beloved CEOs.

It’s not as National Geographic as I thought it would be. In fact, it’s pretty simple.  Your own CEO is probably at one of these stages now.

We all do this; we want what we don’t have.  But the difference is most entrepreneurs will do almost anything to get there.

Here is where you’ve reached the destination but you know that one wrong move might shake the rest of the foundation.

Stage Three: Conquered Mountain, Now On to the Next

Now that you have your footing and are confident, you see the next challenge and start deciding how you’re going to get there.

So what does this mean for those of us who work for these entrepreneurs?  Well, if you can take a step back and see which stage you are in, you can determine where the responsibility lies and when it’s time to make your move.

I’ll give you my example of Arment Dietrich, Spin Sucks, and Spin Sucks Pro:

Arment Dietrich was in stage one when we decided we wanted to create a leading PR industry blog.  We started Spin Sucks, learned a lot, and got where we wanted to be. Then, Gini decided she wanted to tackle the next mountain, and along comes Spin Sucks Pro.

I watched my CEO go through the stages and am able to recognize where opportunity is calling my name.

As any company enters phase three there are roles employees can play:

In my case, I decided I wanted to go with option number two.  I let my CEO know that she can move onto Spin Sucks Pro as I help manage Arment Dietrich.  It is up to us to step up so we let our CEOs use their minds the way nature intended.

Is your company in one of these stages now?  Do you see an opportunity calling your name?