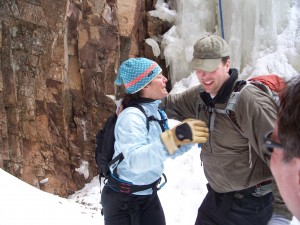 See that picture? That’s me. Crying with joy, because I just rappelled down a 40-foot icefall halfway into a day-long cross-country ski tour. I signed on for that little adventure knowing full well what I was getting into. And I was scared to death until I got past it and was able to relax the rest of the afternoon.

Some of us love to scare ourselves, we embrace fear. Maybe you go to horror films (not I!), you jump off airplanes (again, not I!), you register for a marathon, you take on speaking engagements, you quit your job and start your own business, you shift the direction of the business you own. We all have our different thresholds.

I’ve been thinking about this a lot lately, because I’ve been surrounded by fear in various manifestations and I’ve been analyzing how it can paralyze and how it can catalyze.

I recently worked with an organization that is governed from the top down by fear. Fear of failure. Its very culture has been grounded in “cover my ass,” and “please the boss.” It breeds decisions and a work ethic that are totally unproductive. Instead of building something to be proud of, they are in a state of paralysis.

I think it was Elaine in Seinfeld that said there’s good naked and bad naked. That’s bad naked.

Some  of you know I moved to Chicago last month to join the Arment Dietrich team and launch Project Jack Bauer. I’ve (temporarily) left my husband, two dogs, and skis behind in Idaho to take a little urban adventure and to launch something of which we can be proud. On Sunday Jan 9th, my husband used the return portion of his roundtrip ticket to go back to Idaho, leaving me here, at the completion of my one-way flight to Chicago.

I’m not going to lie. I was a mess. Fear clenched my gut and I really struggled to find comfort somehow as I left Midway Airport and had the entire Sunday staring me in the face, empty.

And then there is my very friend and colleague Gini Dietrich. She has put her heart and soul into Project Jack Bauer for the past year and a half. She has her own set of risks and anxieties that we talk and joke about as we move forward and build something we are excited about.

Let’s just say, between the two of us we have a good supply of puke bags in the office and we’re looking at ordering branded bags soon.

So there you have it; a grab bag of fear scenarios; one that paralyzes (bad naked), and two that catalyze (good naked).

What fascinates me, is why do we do we choose to do this to ourselves?

Somehow, stepping back just and saying no is not an option.

If we aren’t willing to take risks, we must be content with the status quo.

Of course, it would be nice to be assured of a positive outcome. But that’s not possible.

“There was a kind of freedom that came with not caring if it failed, and caring primarily that it was something we could be proud of.”

– Groupon’s Andrew Mason in an interview with Fast Company. When I read this last week, it immediately hit home for me.

There’s nothing to fear in fear itself! if used with care.

What is your good fear story?