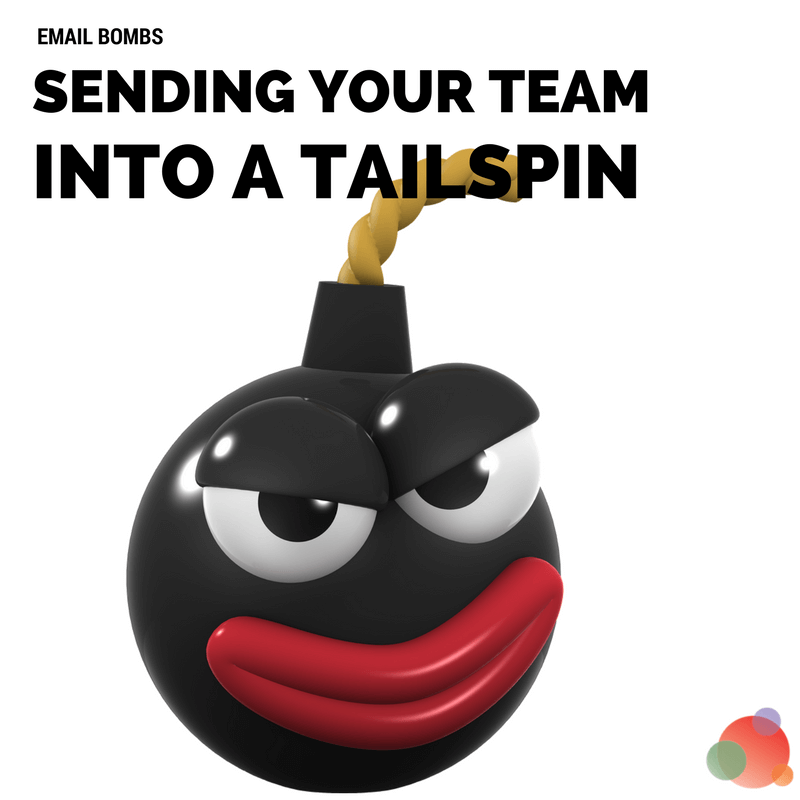 Earlier this week, I recorded a podcast with Matt Inglot for Freelance Transformation.

Which, by-the-way, just celebrated 100 episodes and he had cake to celebrate and did not offer me any.

We really need to work on that technology that delivers food and drink through a desktop.

Would you like a slice of my yummy 100 episodes celebration cake?

Why yes, I would! Thank you!

The recording won’t air for another six to eight weeks, but I’m going to give you a preview because it pertains to today’s topic: Email bombs.

During our conversation, Matt asked me some of the biggest mistakes I’ve made in building a business.

I said I used to be a terrible leader.

When you model your behavior after former bosses, that’s not always good.

But it was all I knew.

Email Bombs in the Middle of the Night are Bad

At dinner, he and I discussed how my team was doing—what he appreciated and where he saw weaknesses.

They were our largest client—by hundreds of thousands of dollars.

Of course I listened to what he had to say.

Now that I have time on my side, I realize it was all dumb, nit-picky things, but he really wanted me to promise I’d be his day-to-day contact from that moment forward.

I went back to my hotel room and fired off an email.

It was not a nice email…and it landed in my team’s inboxes around 2 a.m. their time.

The first thing they saw when they got to the office the next day was my middle-of-the-night rant.

When I returned to Chicago, our managing director came into my office, closed the door, and read me the riot act.

But she was right.

The very last place to have a conversation about client challenges was in an email after midnight.

I hired a leadership coach right after that and he helped me work through those—and other—issues.

It was hard to rebound from that major mistake. It hurt our culture and it hurt morale.

But I worked really hard on it and promised never again to send email bombs.

In fact, I don’t use the written word for any conversation—conflict, constructive criticism, or positive feedback. It’s used only for information sharing.

It turns out, I’m not the only one who had to learn the email bombs lesson.

Email is one of the biggest causes of stress in the workplace.

And, many times, it’s entirely the fault of the leader.

Those middle-of-the-night emails you’re sending to the team to course-correct?

They’re actually email bombs that are causing chaos in your organization.

Not good. At all.

Don’t Use Email for Bad News

Just as email doesn’t have a font to denote sarcasm, it doesn’t have one to denote empathy or any of the other myriad nuances you need to convey to another person when delivering bad news.

Do not use email to fire someone, discuss an impending reorganization, decline a proposal for a raise or a promotion, or to deprive the sender of a conversation.

Sending an email sends a message that you don’t value the person enough to take the time to talk with them about it.

It also leads to many more problems that likely didn’t exist before the email was sent.

Taking the easy way out of an uncomfortable situation in this way is poor leadership.

My story above is a classic case of what not to do unless you’re trying to give everyone on your team a sleepless night and an ulcer from stress.

They also tend to overanalyze and become very defensive, which leads to an unproductive day or days.

Critical feedback needs to be given in person, with the recipient being allowed to ask questions about and provide context to the comments.

We’re all busy, and only have so many minutes in the day to get everything we need to do checked off our list.

This makes it really tempting to send a quick email when there’s a change of plans giving the recipient a heads up on the change that’s needed and asking them to put it in motion.

But here’s the problem: When you are on the receiving end of that email, you have questions.

And when it takes hours, via email, to get replies to those questions, while under the ticking clock of the original plan’s timeline, it’s anxiety-inducing.

There’s no way around it.

It’s not realistic to expect your team members to be mind readers or automatons and change course based on an email you dashed off in the moment.

If you’re tempted to send any of the above email bombs, step away from the computer and have a face-to-face conversation.

It’s the only way to keep your organization’s morale intact.

Email can be an effective tool for giving your team updates or to request things from them.

It’s never the right choice for having difficult conversations or to make decisions, so stop sending those email bombs to your teams.